The Elephantine Colossus fire of 1896 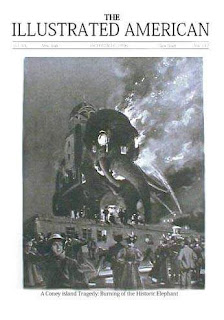 So apparently there was an 150 foot tall hotel built to look like a giant elephant in Coney Island, named the "Elephantine Colossus".

The elephant burned down in 1896. Fortunately it was abandoned at the time. This resulted in the greatest news illustration I have ever seen (pictured).

It was also at one point a giant elephant shaped brothel.