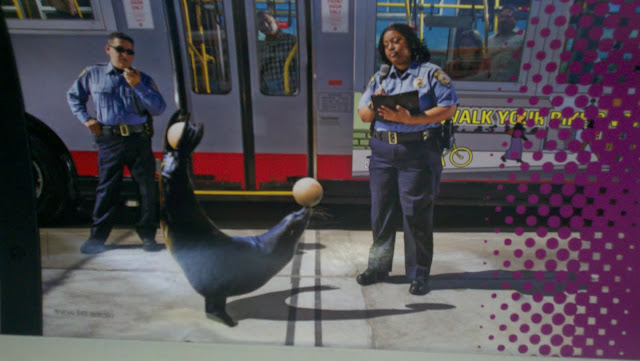 Above is an ad for the San Fransisco Municipal Transit Authority. I saw this on the inside of a bus. It was accompanied by the text, "when it comes to fare evasion, we've seen every trick in the book."

This leads one to ask several questions about the senerio proposed in this ad. Did someone bring this seal to the BART station and train the seal to balance balls as a divesion while the trainer snuck on the subway without paying? If so wouldn't it have been way cheaper for said animal trainer to just pay like a normal person to ride the subway? Surely the cost of bailing out his seal from jail everytime he takes the subway must be drastically more than subway fare.

But the police officers appear to be writing a ticket to the seal itself. Implying that the seal was trying to use this trick on his own to sneak onto the subway without paying. One assumes seals are not allowed on the subway in San Fransicio, since nonguide animals are prohibited from riding on pretty much all public transit ever.

Apparently this is not the case in San Fransicio. Here, seals can go on the subway like anyone else but they have to have the proper fare and figure how to use the bart ticket vending machines, which are hard enough devices to operate with hands, let alone with flippers.

This seems very cruel to seals. If they are allowed on the subway, the city should allow then to pay by performing ball tricks.

I love that in this ad, the female officer on the right looks so put upon, like seals try to sneak on the subway all the time and she is getting pretty sick of it. Sort of like Danny Clover in Lethal Weapon 2, only with the antagonist being a marine mammal instead of South Africans.

Maybe this exact scenario really does happen to the lady cop frequently, because their seems to be a designated box she is checking on her ticket pad for "seal evading fare by use of frivolity."
Posted by Danny at 8:57 AM

Email ThisBlogThis!Share to TwitterShare to FacebookShare to Pinterest
Labels: jj