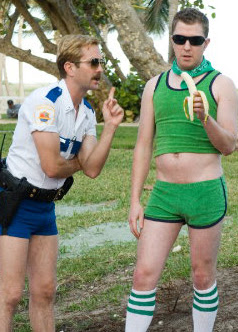 (Pictured from left to right: Thomas Lennon, Awesome short-shorts, Nick Swardson, Awesome green belly shirt, Banana, Sexy green stripey socks.)
I remember loving Nick Swardson's Comedy Central special back in High School. He has done some supporting roles and writing for Adam Sandler productions over the years, but I was excited to find out via subway ads that he has a show this season on Comedy Central. I have no idea how good the show will be, but the trailer for it is pretty awesome:

Maybe its just because I like the orginal Dos Equis commercials so much, but this parody, and the Steve Nash parody I had on here a few months back are both equally awesome. I'm also glad to see that Mr. Swardson finally got to build his own gay robot*. I remember a short skit he did on an album years ago** about a Gay Robot, and I'm sure when you write a two minute skit about a robot who is gay, you never expect that 7 years later Comedy Central will let you actually build your own damn gay robot.

I think going from being an unknown comedian writing jokes about gay robots to actually being able to build a finely crafted Gay Robot on Viacom's dime is the best possible realization of the american dream.

**According to Wikipedia***  this originated on a sketch Nick wrote and preformed on an Adam Sandler CD. Also apparently because of this there is somehow a wiki article simply titled "Gay Robot." I'm glad we live in a world that has an online encyclopedia with an entry title "Gay Robot"

***Which has never been wrong ever as this video evidence shows: