I said a few years back that I would start drinking Colt 45 if Billy Dee Williams started appearing in their ads again.

I am typing this while sipping on a can of the stuff because the folks over at Colt 45 apparently realized that Williams is the second greatest pitchman named Billy of all time* and that they really needed to capitalize on their product's connection to his bad self. Not only did they bring him back in ads last year, but they even had his handsome mug gracing the bottles for a few months last year to promote the new campaign. They are using a drawing of Mr. Williams which depicts him as he looked in the 80's, which is a smart move since Williams is currently 73 years old, and based on this photo of him from 2005, he has aged to look like an even older version of Carl Weathers.** 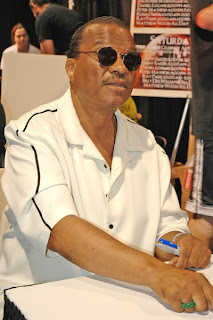 Here is a billboard with the new Billy Dee art on it: 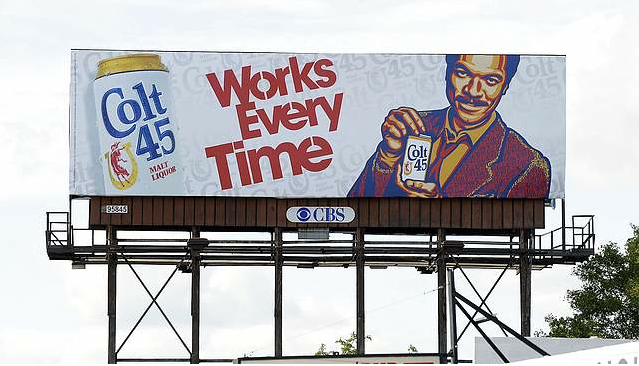 Those are some pretty lame punchlines when you think about them, but Williams has the smoothest delivery and sells the shit out of those punchlines so he not only makes them passable, he makes them awesome. Its like in the mediocre remake of Shaft when Samuel L Jackson tells a girl, "its my duty to please your booty." Which would be the worst line to ever happen in all of filmed entertainment if it was said by Nicolas Cage, but it Samuel L Jackson's hands it turns out, somehow, against all logic to actually sound hip.

When you have Billy Dee Williams pitching your product you don't really need much else. Just point the camera in his general direction, have a lady 'round his arm, have him hold up the can so the audience can read the label, and you are gonna sell a shitload of Colt 45. Colt 45 realized this when they first hired Williams as demonstrated in the TV spot and in this bar mirror from the same campaign***: 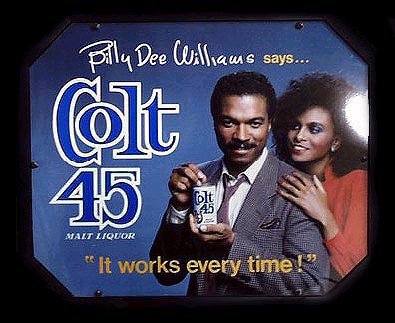 For some reason, later on Colt 45 decided to mess with this formula and made the following:

If I saw that exact video as an instillation at the New York Museum of Modern Art I would be much less confused by its content than trying to understand it in the context of a commercial.

The ad, especially the begining, is rediculously avant-garde, and is made even more ridiculous when you consider it is selling malt liquor. The ad that this most reminds me of  is the Michael Bay directed Dunlop Tires commercial I wrote about back in March.

What's weird is we have cans floating out of a fridge and random shots of horses as the video, and the music is ominous and percussion heavy, but the jiggle's lyrics are down right old fashioned. "With A powerful appeal! A taste that is unreal! Its  Colt 45!" sounds more like ad copy that belongs to the era of  slogans like "The pause that refreshes" than in an ad that is so Michael-Bay-Dunlop-Tire-ad-esque.

Williams apparently received criticism for being in ads for alcohol, and he responded to that criticism with a quote that is more bad-ass that Indiana Jones fighting Rowdy Roddy Piper, "I drink, you drink. Hell, if marijuana was legal, I'd appear in a commercial for that too."

Though we sadly have yet to see a Billy Dee ad for weed, he did recently do a fake ad that is easily the funniest thing I have ever seen happen on Jimmy Kimmel Live****:

**Speaking of Carl Weathers, why does he briefly appear at he beginning and end of every Bud Light ad now?  Really. I genuinely have no idea what he is doing there. You see, I don't have ESPN or Versus at my apartment so when I watch sports its at bars on mute. Therefore, I have just seen those ads where Carl Weathers is sitting looking at the camera holding a big book at the beginning and end, but I have never heard the ad's dialogue. Weathers isn't in the rest of the ad, so maybe that book was the story of the ad and he was opening and closing it for you like how Disney movies used to begin and end with a book with the title of the movie on it.

***I like typing the phrase "ad campaign" because it makes me think of British colonial troops lunching a desert campaign which consists of shooting people, but also writing clever slogan and painting them on billboards.

****Though to paraphrase Leatherheads, being the funniest thing on Jimmy Kimmel Live, is kinda like being the world's tallest midget.
Posted by Danny at 2:05 AM