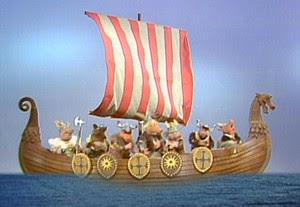 Thor and Baldr discuss: Sucker Punch, and why Thor thinks it wasn't as bad as everyone said it was.  Gram Parsons. The film Grand Theft Parsons. The Venture Brothers. Johnny Depp. Hunter S. Thompson. Fear and Loathing in Las Vegas. Fear and Loathing on the Campaign Trial of 72. Johnny Depp living with Hunter S. Thompson. Joshua Tree National Park.  Planet of the Apes. Lobotomies in film.  Doctor Doom. Mephisto. Son of Satan. Tenacious D: The Pick of Destiny, and why their original HBO series was 1000 times more watchable.  And a bunch of other stuff I am forgetting.

Now that we have reached Episode 9, I can't think of any movies with numbered sequels that go beyond a 9th installment, so I will probably start having the subtitles of episodes be the titles of comic book issue numbers which correspond with the episode number. Unless I forget.

Oh and sorry about no podcast last week, Baldr was off shooting at Hippies in Joshua Tree National Park and I, Thor, was busy building a life sized statue of Nikola Tesla out of Four Loko cans.

I know the internet is over Charlie Sheen*, but I really want to address how clever the marketing department at the Bakersfield Condors is. (While ignoring the fact that I just ended that sentence with a preposition.)

My cousin John brought this to my attention, so major props to him for making all of our lives more awesome by knowing about it. The minor league hockey team the Bakersfield Condors out in Bakersfield, California had "Charlie Sheen" night last week.

It was the greatest hockey promotion I have ever heard of, or at least the most winning. Even better than when the Las Vegas Wranglers had "Rod Blagoavich prison uniform night" Where the refs were dressed as cops and the team all had special Illinois Department of Corrections hockey jerseys on (which were auctioned off for charity at the end of the night.)

The Condors unfortunately did not have specialty jerseys made up to look like bowling shirts, but since they got this promotion together in something like 2 weeks I will give them a pass.

What they did have was this:


-A banner with Charlie's face on it and the word WINNING! behind the goalie which I want to have to hang up above my bed.

-If you have an official clean drug test from a doctor you get in for free (which is probably only a good deal if you happen to have to get a drug test anyway, since I assume those cost more than a minor league hockey ticket.)

-The team was one sale that night for 2 million dollars (which how much Sheen made per episode of 2 and 1/2 men.)

-Anyone dressed like Charlie Sheen or one of the characters he played get in for 2 and 1/2 dollars. (which is obviously meant to represent his former show 2 and 1/2 men, but I instead like to think is symbolizes the number of successful jokes in Charlie's film Major League 2.)**

(this news report about it is pretty hokey, but gets all the major points across)

Footnote(s):
*Craig Ferguson opened his show a few weeks ago saying he was no longer going to make fun of Charlie Sheen since he was worried Sheen is genuinely crazy and making fun of Sheen makes Craig feel like he is "someone in the 19th century paying to stare at the lunatics in Bedlam."

I Just wanted to point that out and also point out I am not as nearly as good a person as Craig, because I still find Charlie's antics hilarious, but I am not a bad enough person to not think Craig is admirable for not kicking people when he sees them as being down.

**
Major League 2 was such a ridiculously huge step down from the awesome first Major League film, which is one of my favorite sports films. It is funny when you look back on the fact that Wesley Snipes was such a big a star at the time that he turned down Major League 2 after being awesome as Willy Mayes Hayes in Major League. Considering Snipes most recent roles were the direct to DVD film The Art of War part 2 and being sent to prison for tax evasion, he must look longingly back on when he was able to turn down films because they were not very good.
Posted by Danny at 2:28 AM No comments: 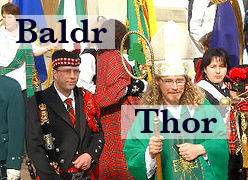 In this Episode of Thor's Hour of Thunder:

Baldr reports on Saint Patrick Day traditions in Vienna, Austria. Discussed this week: Other Saint Patrick's day trivia, including how Belfast is different from Cardiff; Stan Lee's recent interview where he discussed both The Thing's penis and Mr. Fantastic's penis (of the Fantastic 4). (Yes that actually happened.); Why "The Boy From Brazil" is the greatest movie ever; Rare Exports the recent Scandinavian horror film; a review of the recent Norwegian film "The Troll Hunter"; Why the 2005 Bill Goldberg WWE wrestler-ploitation film was ahead of its time (but still awful); inadvertently swearing at childern; rock climbing; dunk tanks; Watchmen; Allan Moore; Doctor Manhattan's big blue penis;The Incredible Hulk; Peter David; Todd mcfarlane; even more about superheros having sex than stated above; and as always, much much more, possibly more than you want.

I'm hoping to do a post today about some of my favorite Guinness ads, but in case I don't get around to it, here is the fantastic end scene of the film Waking Ned Devine. The only version I could find online was dubbed into german, but since Saint Patrick's day has become an excuse for people of every nationality to get drunk, the sounds of bunch of irishmen making a toast dubbed into German actually kinda epitomizes the current spirit of Saint Patrick's Day. Also the accents used by the german voice actors, which sounds like an Irish accent played backwards, are pretty epic.

(Sorry about the ad in front of the video. Damn you DailyMotion.com!)


The Parting Glass by Blazejowski
Posted by Danny at 10:32 AM 1 comment:

I want this to be an entire TV Series

New Jersey Devil's Left Wing Zach Parise recently did a commercial for Easton Hockey Skates that makes me very happy. I'm a big fan of 70's cop shows and cop movies and the cliches of the genre, and an even bigger fan of hockey, so pretty much the only way this ad could have more elements that appealed to me is if they somehow found a way to incorporate into it Hunter S. Thomson and nudity.

What really makes the ad is the last line. I love that line. That and the fact that they let the car going down the cliff shot run so so long. thats a solid 15 seconds of car falling down a cliff and it gets funnier each second.
Posted by Danny at 10:48 AM No comments:

Here is the latest episode of my and Shaun's podcast. This our discussion includes:

A brief history of Japanese monsters movies, and why Legend of Dinosaurs & Monster Birds might be the weirdest of the genre; Why Thor is excited for Sucker Punch; Baldr's review of the new Korean horror film "I Saw the Devil"; Thor's 30 second review of Watchmen; Why DC needs to think of more interesting things for Aquaman to do now that he is back from the dead; as well as many more things that I can't remember because we recorded this on Sunday and I wasn't able to post it till today.

You can also subscribe to it on itunes by clicking here, which will cause me and Shaun to love you forever. 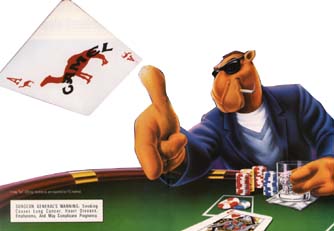 I wrote an article about sex in Newport Cigarette ad's from the 1970's till today over at the awesome comedy sex blog ItsNotThatWeird.  Check it out here.
Posted by Danny at 5:04 PM No comments:

In honor of Jackass 3D, the best documentary film of 2010, being released on DVD this week, I thought I would take a second to talk about Jackass 3D's radio ad campaign, mostly as an excuse to post a clip of the BMX joust from the Jackass T.V. Show.

Jackass is a pretty difficult movie to sell using a radio ad. You can't use dialogue clips like you would with a trailer for a normal comedy, since all the memorable dialogue from everything in the Jackass cannon is them swearing after they injure themselves.

The ad team behind Jackass 3D took the clever approach of having an announcer, in an emotionless voice, give the names of some of the stunts for about 45 seconds, and just when you had reached maximum curiosity about what the hell this ad was about, the familiar jackass guitar riff came in followed by the details about the film stated over the show's theme song.

It somehow made an ad for jackass suspenseful, and really grabbed one's attention. As the list goes on, the listener begins to wonder if the station's D.J. has cut into the commercials to read the only the answers to a mad-lib he just did, or has possibly suddenly developed some sort of disorder where he speaks only in Pink Floyd song titles "Roller-skate Buffalo!,Atomic Heart Mother!,Lamborghini Tooth Pull!,Alan's Psychedelic Breakfast!"

Here are what the names of some of the stunts in part 3D were. I'm listed them in order of how much they sound like a Jackass stunt, so that if you want to get an idea of what this ad was like you can read them aloud to your self right now. (Play the jackass theme song immediately afterward to get the full effect.)
Tee Ball, The Rocky, Jet Airplane, The Blind Side, Bad Dog, Sweat Suit Cocktail, Roller-skate Buffalo, Golf Ball Racquetball, Gorilla in the Hotel Room, Lamborghini Tooth Pull, Penis Peeing Camera.


Jackass - BMX Joust by pic-madden
Posted by Danny at 4:54 PM No comments:

This Ad is a Sausage-fest 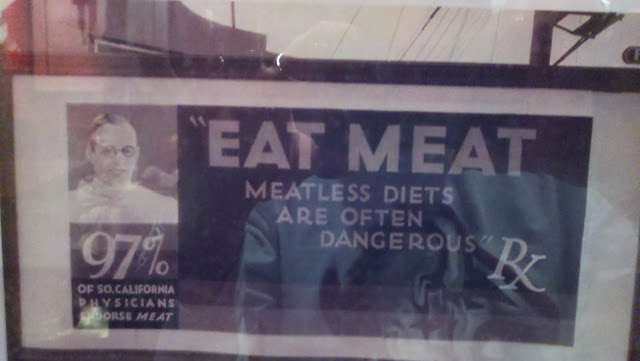 Here is an ad from the Food and Drug Administration from the early 20th century. The NYC cheesesteak joint "99 miles to Philly" has this picture on display by the register, I suppose in an effort to make its customers feel less guilty about eating their own bodyweight in meat and cheese wiz.

Beyond the humor in looking back at what the government health reccomendations were almost 100 years ago, I also always enjoy the design of ads from this era. I think illustrations are such an effective and elegant way to get a message across in a commercial, its it is a shame they are so seldomn. Used now that photography has become the norm for print ads and billboards.
Posted by Danny at 5:40 PM No comments: 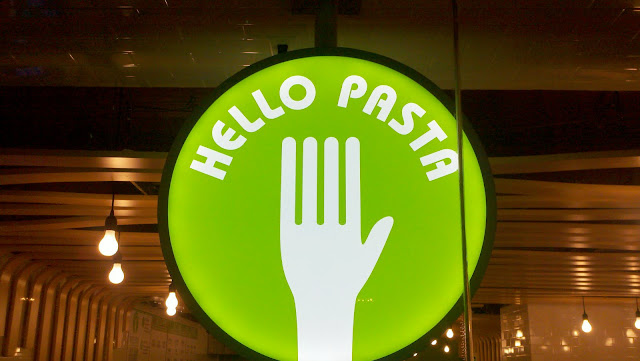 No analysis,  just wanted to say this store's name and logo make me happy.
(sent via cell phone)
Posted by Danny at 1:07 PM No comments: