Tony the Tiger's appearance sure has drastically changed through the years, more so than most of his cereal mascot brethren. For example, if you look at Toucan Sam from the 1950s he looks pretty much the same as the toucan on the Froot Loops box today. Compare him in the 50s versus today: 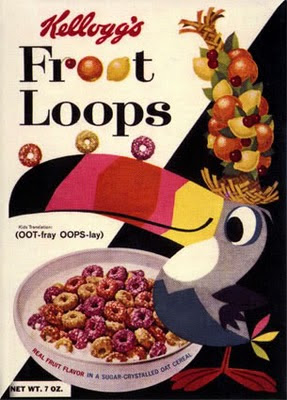 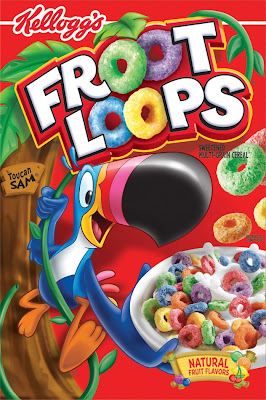 He is obviously drawn in a very different style today, but he has the same colors on his beak and he appears to be about the same propositions in terms of body to beak ratio, though at some point his wings became much larger and for all intents and purposes pretty much turned into hands. The only other major change I notice is that his head is light blue now instead of gray.

But Tony is another story. I assume his changed appearance was created to go hand-in-hand with Frosted Flakes positioning its cereal as part of an active life style. This culminated in Kellogg's "Energy Frosted Flakes" which I assume contain Taurine or caffeine. Or maybe they aren't any different from regular frosted flakes as marketing works in mysterious ways.

(Taurine, the stimulant in Red Bull, was originally found as a component in bull dung. I kid you not. It is now artificially manufactured. One questions why Red Bull chose to apparently name their product after the disgusting origin of one of its ingredients. Jell-O was wise enough to not name its product "Animal Bones.")

I've noticed that as Kelloggs has tried to position Frosted Flakes as a cereal eaten by active life-styled mountain climbing children, Tony the Tiger has gotten more and more buff. Look at Mr. The Tiger from the 1950s 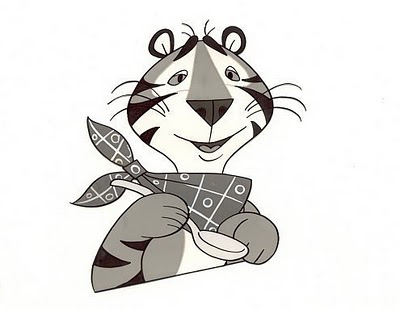 Versus Tony the Tiger circa now: 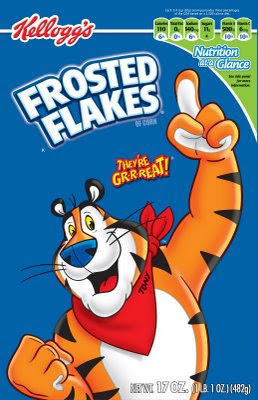 That is one 'roided out tiger.

I guess its admirable for Kellogsg to want kids to be in shape, but they could probably do that more effectively by making Frosted Flakes have more vitamins and such, instead of keeping the same okay but not great-and certainly not grrrrrrrrreat-for you nutritional content, and just making the cereal appear to be better for you by drawing the tiger looking more and more like Barry Bonds, and showing the kids in the commercials playing baseball with the help of frosted flakes.

But if Kelloggs is just going to continue with the "Frosted Flakes makes you better at sports" campaign that they have been using for the better part of 20 years now, why on earth haven't they licensed the song "Eye of the Tiger" from Rocky III to be used in their ads. It really can't be that expensive to license songs by the band Survivor at this point, since 100 percent of their hit songs were "Eye of the Tiger".

According to wiki that song was used in Frosted Flakes commercials in the UK, but I am unable to find any video evidence of this.

So instead I will just post a video of "Eye of the Tiger" playing over the training montage from Rocky III, which is honestly what I would have ended this entry with anyway, even if I had found footage of a Frosted Flakes ad with the song in it.

Actually, I should just start ending all of my posts with clips of the training montages from Rocky movies, if only so that I can find them easier when I want to watch them.