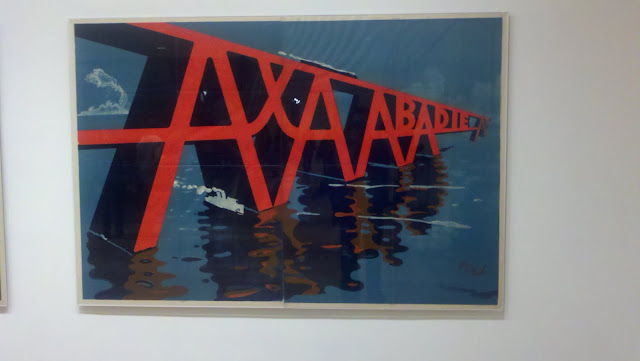 Here is an awesome ad for the Abadia Rolled Paper Company that is currently on display at MoMa in New York. It was made in 1923-1924 by artist/graphic designer Milhaly Biro. The fact that he apparently worked on this over the course of two years explains in part why it is so much better looking than modern ads.

If I remember I'm going to try and post more old school illustrated advertising here in the coming weeks, such as Norman Rockwell's ads for Typewriters and Plymouth automobiles.

I feel like having to take the time to hand paint an ad inherently caused it to be better because if someone is going to spend that many hours creating an image they have a greater incentive to make something that doesn't suck. If you are photo-shopping a movie poster, and you spend ten seconds on it (for example see every movie poster that I've ever reviewed on this site), and it sucks, you don't really care. You got paid to do it, and you will spend far less time looking at it than I will have to when it gets put up on every subway platform in New York. But if you're going to spend weeks creating a piece of art you have a lot more invested in it and want to make both the concept and execution of it worthwhile.
Posted by Danny at 1:27 PM No comments:

These mannequins are way better than the movie "Mannequin 2: On the Move" 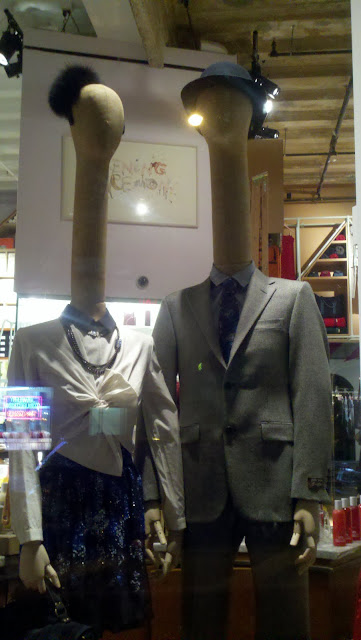 The Insane Clown Posse can add these Mannequins  to their list of Miracles that science can't explain. I mean, what's freakier than a "yellow ass, long neck giraffe" if not two dapperly dressed mannequins with long ass necks.


To be briefly actually analytical, as someone who tends not to notice clothing store window displays, this display does a good job of grabbing the passerby's attention.
Posted by Danny at 1:42 PM No comments: 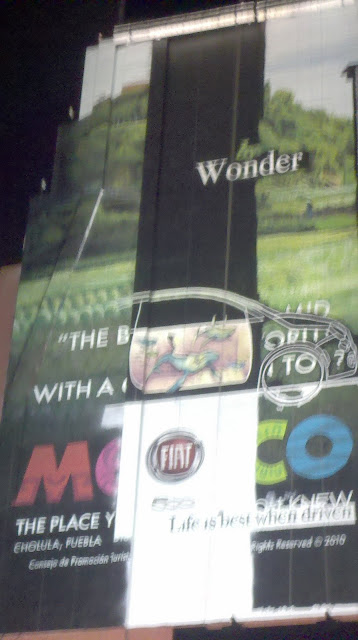 Much like that mosquito that lays its larva inside of a living spider, the Mexico billboard will soon be taken over by Fiat and eaten by its tiny Fiat children.
Posted by Danny at 12:42 PM No comments:

Drive Your Fiat to Mexico! 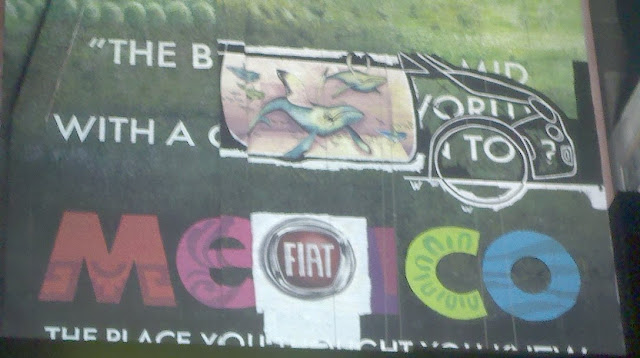 There is this awesome billboard just north of Madison Square Garden on 8th avenue that is still hand painted.
It's cold in New York today so, so I guess the billboard painters got started but all their brushes froze solid inside of their paint buckets so they abandoned the project and got back to Serwin-Williams to defrost their paintcicles.
The result is the ad you see here that is 90 percent for vacationing in Mexico, but with a Fiat logo.
Or maybe between the drug cartel violence in Mexico and Fiat's notorious tendency for their cars to break down and/or catch fire, this ad is just an ad for items you could purchase that would result in your likely grizzly death.
Posted by Danny at 6:08 PM No comments:

This entry isn't so strictly about commercials, but it's short 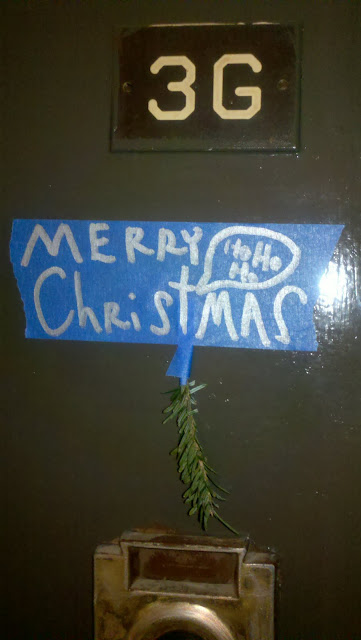 Here is the intricate Yuletide display that I put on my door at my apartment, so no, this isn't really an ad, and yes it is a me related entry which i promised not to do when i started this whole blog thing.

For the sake of justifying this entry, I guess this could be seen as an ad directed at the rest of my building, advertising my laziness and ineptitude in matters of decorating and home decor.

So I guess this is a good a time as any to wish anyone reading this a Merry Xmas and Hannakuh and Kwanzaa and, just to get a jump on things, Arbor Day too.
Posted by Danny at 5:44 PM No comments:

In fact this ad might be the only circumstance I can think of where I would actually willingly listen to Ms. Carey.

I think stuff like this is always a good way to build up a fan base and get people interested in going to a hockey game who wouldn't normally think about it. So cheers to the clever folks at the Belfast Giants, the sight of a bunch of tough hockey players dancing and carrying on is awesome. Maybe next month they can get the word out about their games by dancing to Lady GaGa.


Via Puck Daddy
Belfast Giants official page for video on their site
Posted by Danny at 2:30 PM No comments:

Come one come all and take a shit in times square! 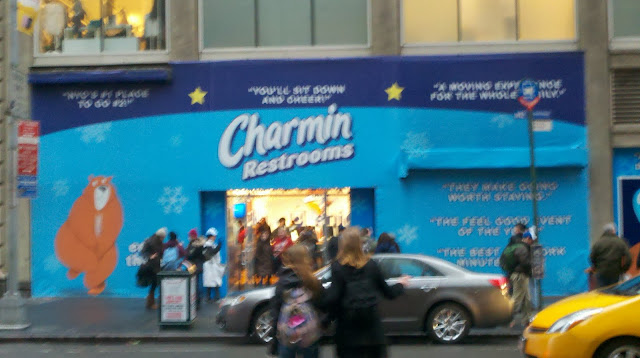 Last year when the virgin mega store in times square closed, in was replaced during the christmas season by a store that had nothing by clean restrooms stocked with charmin toliet paper. I regretably never got a chance to use these facilities, but thought it was a pretty genius promotion.
This holiday season we are still in a recession, with several large store fronts in times square out of bussiness. But your wallets loss is your butt's gain, because charmin took over another vacant store and made the whole thin into toliets.
I a plan on partaking in their deluxe toliet experience and writing up what the store is like at some point this week.
Posted by Danny at 10:54 AM No comments:

Grafitti in bathroom at bar on w 4thst and 6th ave, nyc 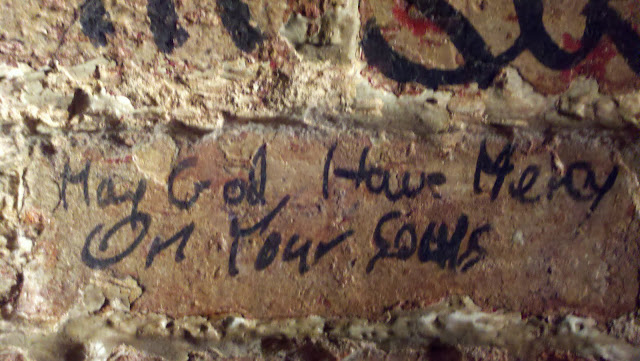 I just dug the handwriting this guy has, and the fact that he kept the message isolated to one brick. It is possibly a guerrilla ad for Sharpies. 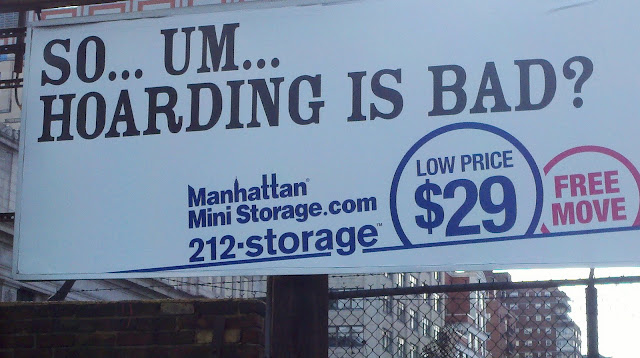 Here are two ads for manhattan mini storage. They are pretty funny. That's the extent of my thoughts on them. I held off posting this for two weeks in hopes that I would think of something to say about them. But, alas it looks like this is all you are getting. 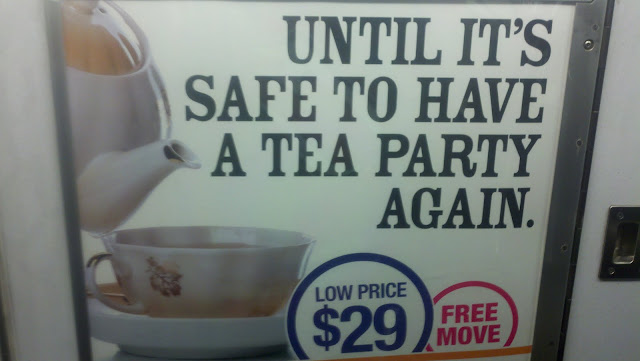 Footnotes:
Nah, I couldn't even think of any random trivia about tea or anything to suppliment this entry with.
Posted by Danny at 6:16 AM 1 comment:

This ad is another one that I'm putting up more for the work of the actor than for the genius of the ad copy. But since the actor is Kevin Bacon, and the character he plays in this is the world's biggest Kevin Bacon fan, the ad copy could have just consisted of a cocktail napkin with the words "Kevin bacon talks" scribbed on it and Mr. Bacon still would have found a way to make it awesome.* Actually, watching the commercial again, I think that actually may have been all the guidance they gave Mr. Bacon. Unrelatedly, if you haven't seen Kevin Bacon's film The Woodsman, for my money its tied with In the Bedroom for best drama film of the aughts.

Footnotes
*For the record, and I know this was like a decade ago and no one cares, but piss off its my site, I thought out of the actors in Mystic River, Kevin Bacon most deserved an Oscar. Tim Robbins did a great job but had a really showy role to work with (though Robbins is an awesome actor). I really can't explain how Sean Penn won for Mystic River even though he played the exact same damn role he has for the last 15 years. If they really wanted to give Penn an Oscar that year, they should have given him a retroactive one for his work in Fast Times at Ridgemont High.
Posted by Danny at 7:37 AM 1 comment: