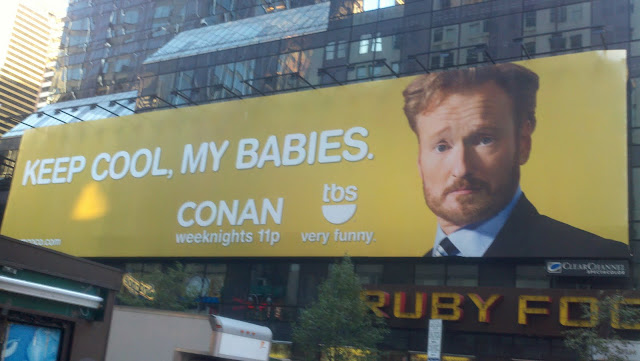 Based on the first three episodes, Conan's new show does a pretty good job of bringing back the weird wonderful and sometimes excessively stupid humor that made me love conan so much back in middle school and high school, as opposed to the more stayed safe humor he evolved into into in late 2000s that made me switch to watching Crab Ferguson*.
I saw the Conan using  the masturbating bear in one of the first bits in the first episode as demonstrating to their audience they ain't be playing it safe this time. Especially since they were afraid to use the bear** until his final weeks of the tonight show.
I am glad conan is back on the air, but I will miss covering his awesome ads here, if only because it gives me am excuse to post awesome clips from the late 1990s.
(Some of which I will post below later. I promise. I mean unless I forget to.)
Footnotes:
*as much as i love conan amd grew up watching him, i have to say i think Craig is easily the best late nigh host i have seen and his show just keeps getting funnier.
**or banned from using the bear by nbc. I never could find out if conan was told by nbc to make his show less weird.
Posted by Danny at 5:45 AM