Times, Squared (I still can't think of a more clever title for this post) 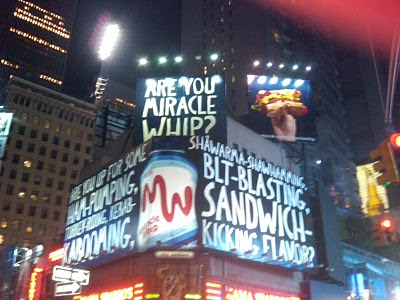 I for some reason haven't done an entry yet on any Times Square billboards despite them being billboard advertising at their most expensive. Some new ads in Times Square this summer include this ad for Miracle Whip.

I assumed these vaguely ironic or at least over enthusiastic Miracle Whip ads had played themselves out once Colbert mocked them back in December. And Miracle Whip used his comments to get publicity for their ad campaign.

When Miracle Whip bought ads during every commercial break of a December episode of the Colbert Report, and Colbert during the show said the joke was in them because he was going to use their money to buy real Mayonnaise, Miracle Whip seemed to have taken this ad campaign as far as it could have possibly gone. But nope, here we are six months later and the are still trying the make processed sandwich topping hip. At least this ad spares us the hipsters eating sandwiches in a baby pool in this campaign's TV ads.

I guess the folks at Kraft, rightly, figured Colbert making fun of their ads was as hip as it was gonna ever gonna get for them so they are gonna stick with these ads unless they can convince the Kings of Leon to record a song about Miricle Whip.
Posted by Danny at 4:46 PM