This post could be the start of a multiple part entry about breakfast cereal advertisements and mascots. Unless I decide after post it that its lame, in which case it will be the failed pilot episode of me discussing Dig 'Em. 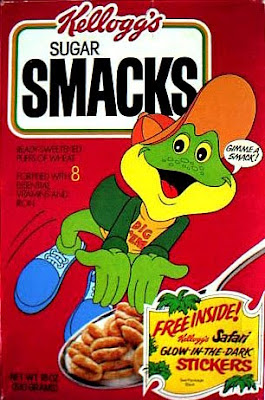 (Remember Dig 'Em?)
I started thinking about Tony the Tiger and his ilk after looking for more mascots wearing sunglasses to put on my site's logo. I noticed after putting Joe Camel, Spuds Mackenzie, and the 7up cool spot on the logo that a lot of mascots wear sunglasses. This is not surprising given that sunglasses still constitutes "hip and edgy" to 50 year olds who are trying to convince the key demographic of18 to 25 year olds that their product is cool. Except in the case of Joe Camel where they were marketing to 14 year olds. (No, really (via wikipedia) (which links to pdfs of original court documents.) )

The earliest marketing I can actively remember influencing me-besides commercials for TV shows and movies-is TV commercials for breakfast cereals, so I thought it would be interesting to revisit ads and mascots that I liked or disliked when I was a kid and see how they hold up. It would be impossible to be objective about ads I enjoyed when I was 6, but since this site has never been about me being objective I'm not too worried.

Unlike with a lot of other products, breakfast cereals ads have to convince kids that they will be delicious and taste like candy covered in candy, submerged in milk, but not be so outlandish that mothers refuse to buy them for their kids. Sort of like how the A-Team T.V. show had explosions and car crashes to appeal to kids but you saw everyone involved coming out unscathed to keep parents from worrying. Except in this case sugar was the explosions, chocolate was the car crashes, and vitamins and whatever the hell Riboflavin is were the people walking away unscathed. (Don't worry if you lost me on that, I just confused myself with that metaphor.)

This line was definitely crossed by products such as Cookie Crisp, which seemed to be daring parents to be seen buying something so obviously bad for their children. Or at least it was in my childhood household. We would eat lots of frosted flakes, and eat lucky charms intermittently, but Cookie Crisp was viewed as a dessert. Looking back at the ads this was rightfully so. Corn flakes were long excepted as okay for breakfast, and people had been putting sugar on them for decades, so Frosted Flakes seemed pretty innocuous. Lucky Charms at least had way more of the cereal pieces than the marshmallow pieces, and since the marshmallows in it were really made from saw dust and elmer's glue, they couldn't have been that bad for kids.

The folks at General Mills probably created this beast not with the primary goal of making a profit but instead just for their own personal amusement. Knowing full well that after it was released they could go to the supermarket for years to come and get so much joy out of watching the inevitable cold war stand off between mothers who made the mistake of taking their kid down the cereal aisle and now had to talk them down to a slightly less overtly terrible for you cereal, like, well pretty much anything, even CoCo Puffs at least doesn't have the word "cookies" in the title.

Despite its name and reputation, Cookie Crisp, at with its current listed ingredients, appears to be no better or worse for you than Frosted Flakes. I'm not sure what its nutritional content was when it debuted in 1977, but according to a copy of the nutritional facts from this weight loss site, cookie crisp only has 1 more gram of sugar per cup than frosted flakes and pretty much the same number of calories, calories from fat, and vitamin content.

So maybe Cookie Crisp's marketing of: "Cookies for breakfast! look this cereal is so bad for you this guy and his dog have to resort to a theft to eat it because their mom won't let them eat Coooooooooookie Crisp!" wasn't the smartest idea on their part. General Mills probably should have made more of a marketing effort to convince parents that the cereal was not so terrible that it would instantly give children diabetes on contact.

Here's the type of ads I remember for cookie crisp, with a burgler and his dog trying to steal cookie crisp while a cop chases them.

Did they say the title of the cop chasing them was "Cookie Cop." That job sound delicious.

The animation in this is way superior to the actual animation for the TV shows I watched as a kie. Look back on something like Teenage Mutant Ninja Turtles and its drawn with tell tall flatness of cheap animation. But this ad is pretty lush looking. I mean its not Don Bluth, but its handsome animation considering its a 1990's cereal commercial.

Here is a much less frenetic commercial from the 1980's proving the continuing decrease in children's attention spans:

Why is the cop dressed like a british Bobby? and why does he have a squad car if he only patrols a table? I guess these are silly questions, but I'm glad the cop and robber weren't depicted as being tiny tiny people when I was a kid. I think after seeing that kid almost get eaten by Rick Moranis the cheerios cereal in Honey, I Shrunk the Kids, I would had been sifting through my cereal with a strainer worried that I was going to eat that tiny little bandit.

Tune in next time for a discussion of Tony the Tiger's evolution from cartoon tiger to All-American athlete.
Posted by Danny at 10:08 PM