I went to the New York auto show a few weeks back, and realized that many of the promotional displays were cool enough, or ridiculous enough to merit a blog post or two or three depending on how excited I get. 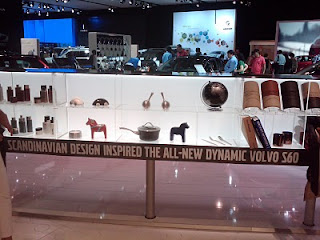 This picture is of part of the Volvo display. This foolishness is what inspired me to start taking pictures to do a post about the displays. The slogan was “Scandinavian design inspired”, which combined with the shelving and random wooden decorative objects makes me think Volvo is trying to sell cars by comparing them selves to Ikea. Maybe to the ad guys who created the phrase “Scandinavian design," this means their cars are like some awesome well made Scandinavian product that is popular throughout Europe which I'm unfamiliar with, or maybe they are saying this car is as well crafted as something else Scandinavian like the band ABBA, or the Swedish bikikni team, or award winning actor and full time handsome person Stellan Skarsgard. 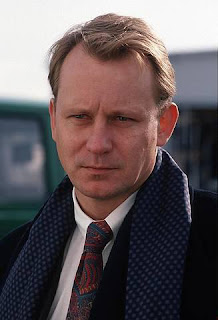 But all I think of when I see shelving units and the phrase Scandinavian craftsmanship is Ikea. Which just makes me think of furniture that comes in a box the size of an Uno card, which consists of 2000 screws and is supposed to be assembled with one thin little alan wrench made of a light blub filament. This really is not the image marketers should try to bring to the forefront of a car buyers mind. Unless they are selling kits from which you can assemble one of those custom full size wooden cars, which are awesome. 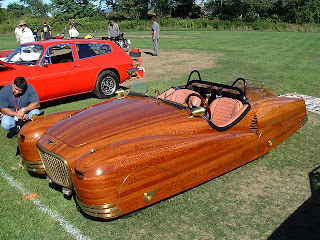 Volvo's Scandinavian brethren, Saab, who as a former asset of the now federally owned General Motors has gone from being on the brink of being disbanded completely, to being almost bought by tiny Swedish supercar maker Koenigsegg in the summer of 2009, a deal which fell through when it was revealed no one, anywhere had ever bought a car from Koenigsegg, and that company just consisted of just one guy. So Saab was back to as state impending doom for the rest of 2009 until they were bought (for real this time) in February 2010 by an other tiny supercar company, the Dutch company Spyker, which has made and sold even fewer cars than the zero Koenigsegg had sold.
I figured since Saab is technically right now not owned by anyone, since the ink is still drying on the Spyker deal and Spyker is busy getting sued by the Saab Aerospace company, I assumed Saab's current Hospice nurse GM would not pony up much dough for a display. Surprisingly Saab had a welcoming display with high production values. A few other automakers had furniture in their areas to encourage guests to stay longer. But the rest of the furniture at the show at the show were all very modern and uncomfortable bench style apparati integrated into the walls of the display. Saab actually sprang for comfy padded chairs, and consequently had the only seating I saw anyone actually sit in the whole show. 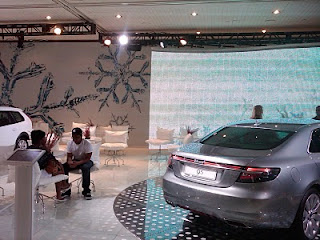 Pictured above: a couple discussing how the would never buy a Saab in a million years because Saabs are Dorkmobiles, but also discussing how the appreciate Saab providing them with very nice chairs to relax in before they stand up again to go look at cars they actually like.
(actually I do like the rear styling on whatever model Saab is in foreground of the picture.)

Well that brings us to the end of the Swedish portion of the New York auto show, so I think that this is a good time to break. More on the auto show when I think of things to say about the other pictures I have.
I'll leave you with the musical stylings of the greatest Scandinavian band ever. In fact I would go so far as to say these guys are the best thing to come out of Norway since Berserker Vikings. Here is Hurra Torpedo covering Bonnie Taylor's "Total Eclipse of the Heart" using an chest freezer and a couple of stoves and steel girder as their rhythm section.

(Thanks to T. Cunnion for showing me the Hurra Torpedo clip 4 years ago.)

BONUS Stellan Skarsgard fact: Actors Paul Bettany and Jennifer Connelly named their child Stellan after Mr. Skarsgard. Bettany said in an interview on Conan O'Brien that he wanted their child to be named Stellan not just because Skarsgard is a good friend of theirs, but also because Skarsgard has the highest alcohol tolerance of any person Bettany has ever met, and he was hoping the name would help pass along this trait.
Posted by Danny at 9:48 PM