Suzuki makes cars in addition to making their popular motorcycles. No one realizes this. I read a positive review of the new Suzuki Kizashi in Automobile Magazine a few months ago but still forgot about their entire automotive division, despite the car's name being memorable for sounding like the ingredient in an Odwalla fruit juice. Because of this I was surprised when I saw a Suzuki car display in the basement of the New York Auto Show. Suzuki themselves apparently forget they made cars also because the basement was reserved for truck displays and the Munster's drag racer. (Really) 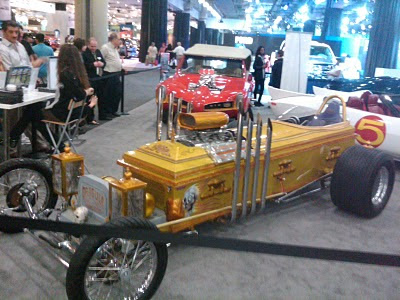 Suzuki must have decided they were sick of no one remembering that they make a four door that is by all account well built but bland to the point where I've already forgotten what it looks like despite having looked at a picture of it 90 seconds ago to jog my memory so I can write this. (Though to be fair to Suzuki that may be because I looked at the Munster's car immediately afterward, which is a car so cool Rob Zombie wrote his best song about it.)

Lets put a picture of the flagship Suzuki car, the Kizashi, here for a point of reference: 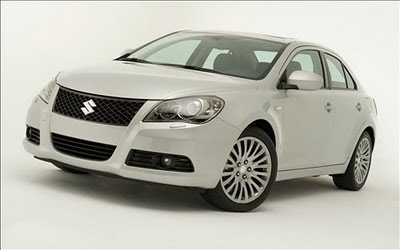 I'm not really being fair to Suzuki by making fun of this car for being bland, it is no more derivative than any of Hyundai's or Kia's takes on family cars, and it has kind of a sporty look. It just doesn't do enough to stand out when it doesn't have voice of Jeff Bridges making me want to buy it like Hyundai does (and I will do anything the star of The Big Lebowski tells me to) or the cleverness of Kia ads which I have already talked about at length in this blog. 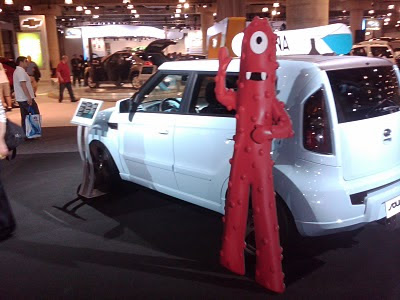 Suzuki is not going to take having unmemorable cars lying down though. They decided to bring along a concept car to the Auto Show that was, well, I can most succinctly describe it by saying it would have been right at home at the Tokyo Auto Show in its early 2000's zany heyday.

(I am not going to stroll down memory lane to put the above Tokyo statement in context. This is obviously tangential, but if you read this blog you know it doesn't so much have a point as a series of overlapping tangents of various lengths.)

Back in 2001, Automobile Magazine covered the Tokyo Auto Show with an article that focused entirely on the ridiculous cartoon looking concept cars that were so common at the Tokyo show until this recent recession forced the Japanese automakers to scale back the divisions of their companies that apparently only existed to create ridiculous impractical concept cars for the Tokyo Auto Show.

These cars where never meant to be stylish or buildible. Most weird looking concept cars at auto shows in every city that is not Tokyo are built to attract attention but also to show off some specific new technology that will be later used in future production cars. Mercedes once built a show car for a European auto show that company itself stated was built entirely to show off the tires and suspension technology it had. The Tokyo cars were not like this, because all of the technology they incorporated was insane.

These cars all seemed to have been designed by Hayao Miyazaki after a long night of Jager and LSD. (actually come to think it the movie Poyno probably was also the result of this.)

One of cars shown in the Automobile Magazine article was a Toyota called the Pod. I just found a description of it on Wiki and it is even weirder than I remembered. The car had artificial intelligence developed by Sony, which allowed it to do things so ridiculous I cannot make them any funnier than this non judgmental description of them from wikipedia:

"The car could also judge the attitude and mood of the driver based on their reactions and how they are driving, and could offer advice on how to improve their current mood. The seats inside are like stools which could freely spin and rotate. On the exterior, the Pod could express its own feelings with coloured LEDs - red for anger, yellow for happy, blue for sad - and an antenna that wags, much like a dog's tail." 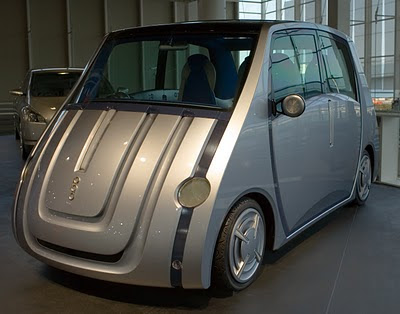 (this car also somehow managed to look ugly, boring, and weird all at the same time not an easy feet.)

So it was a car that can get angry, and will give you suggestions on how you can be happier (Hal9000 springs to mind, "I can't let you merge dave.") But the folks at Toyota didn't think all that was quite enough to make their car stand out so they found away to make this car uber creepy by giving it the ability to independently wags its antenna. The writer at Automobile summed up this Toyota nicely by stating all its weird features "where, either genius or insane or both."

This idea of genius, insane, or both, describes nicely the Suzuki concept car they brought along to the New York Auto Show. It's the perfect car for the Robot Beach Boys to drive on their 2087 reunion tour. Its insanity cannot be described nearly as well as it can be shown so it is pictured below: 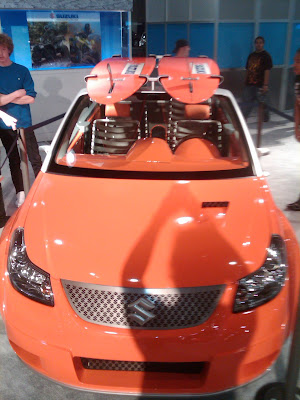 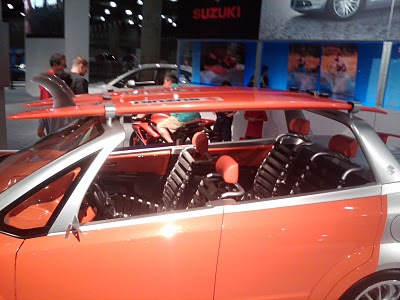 This car has a roof made out of surf boards and with the whole contraption, including the surf boards, is painted a color that could only be created by eating a traffic cone and then vomiting it up.

I can make fun of it all I want but you and I will both sure as hell remember that Suzuki makes cars from now on. I really can't fault them for this. They obviously set out to create something stupid and ridiculous and exceeded beyond what I would have thought possible.

This beach buggy is not a convertible but it has no back wind shield and integrated surfboards welded upside to the A and B pillars, because roofs are for squares.

I assume this last item is a safety feature. This way if you are near the beach and your car falls off a small cliff and lands upside down in the ocean you can use the surf board roof to surf on your car to safety. When use a wave to ride your car back to dry land you don't even have to leave your car to sit and enjoy the sun, because instead of seats it has leather beach chairs: 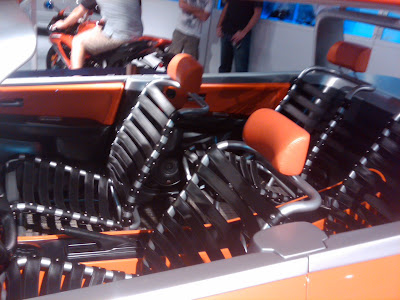 (P.S. about this post's title: I remembered from my days as a video store clerk that there was a Police Academy sequel called Mission to Moscow. Due to my extensive research before using it as the title of this post, I discovered that it is in fact the title of the 7th movie in the series. Despite having seen a lot of dumb movies I've never had the desire to see any Steve Guttenburg movie that was not Short Circuit, so I've never seen any of the Police Academy movie, but 7 movies? thats 1 more than their are Star Wars movies, and 4 more than their are watchable Star Wars movies.)
Posted by Danny at 10:22 PM