Jesus crucifies the batter with his knuckleball 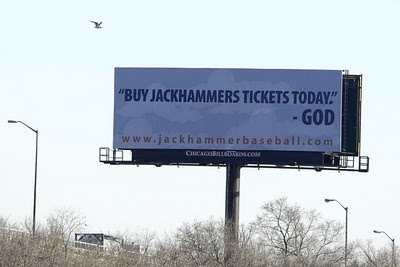 Here is a billboard from about six months ago that was put up by the Joliet Jackhammers, a minor league baseball team that plays in a town outside of Chicago, most famous, at least in my mind, for being the town containing the prison the John Belushi is let out of at the beginning of The Blues Brothers. Though now it is equally famous in my mind for having the baseball team with the funniest marketing ever.

Apparently this was related to a limited time promotion in which a portion of the ticket sales went to the Church or charity of your choice. But I think the ad works best completely out of context. Which I assume is how most people would have run across it anyway, while driving down the highway. Hopefully, this being Joliet, the people passing it would be driving in a used police cruiser while on a mission from God.

Realizing this ad was awesome the folks at the Jackhammer's front office apparently later bought a nearby billboard as well and inscribed it with the message,"'Don't buy Jackhammers tickets' -The Devil."

If they Jackhammers had only taken this idea to its logical conclusion and changed their logo to be of Jesus and the Devil fighting each other using Sock'em Boppers they would be my new favorite baseball team.

I know the 1990's Sock'em Boppers ad is only peripherally related to the topic at hand but its snazzy theme song should be used as often as possible regardless of the context. Also things being unrelated to the topic I am supposedly on is more of a reoccurring theme in this blog than the actual stated theme.


(The source I found out about the existence of that Jackhammer's billboard through was the hilarious minor league sports team logo review website Bush League Factor, who uses this ad as a jumping off point to go on a great rant which somehow ends up with the conclusion that god is a compulsive gambler, before eventually reviewing the team's logo. Most of his reviews are like this. You can see why I like his site.) 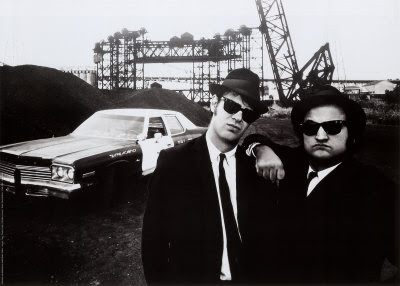 (pictured above, the 2010 Joliet Jackhammers pitching staff and the team's bus.)
Posted by Danny at 1:03 AM