Robet Carlyle not stabbing you in the face with his drink 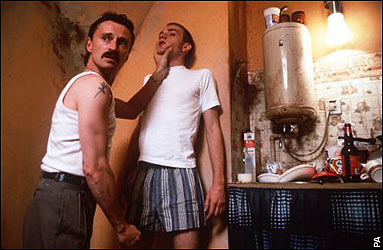 I read in Advertising age recently that this Johnie Walker Scotch ad is widely regarded as "The Best Ad of 2010 which does not star Isaiah Mustafa."

I hadn't seen it before because its a 6 minute long short film which I assume you would watch if you went to Johnny Walker's website. And despite enjoying a wide array of hooch, I don't really end up on websites for alcoholic beverages unless I go there to find material for this site (see the Miller High Life redesign post).

This ad/shortfilm/35 second bagpipe concert stars Robert Carlyle, who is still most famous for his awesome turn as total asshat and psychopath Franco Begbie in Trainspotting (Despite his having appeared in 37 projects and counting since then).

I think Carlyle is a really underrated actor, I've never seen him in a film and not thought he was awesome in it, even if the movie around him wasn't good.* He does a great job in this ad, but I'm only so interested in this history of this product, I think the ad appeals more to people who already enjoy Johnnie Walker than to someone like me who has never tried it.

I first started trying to write this post back in September but kept getting just past the two minute mark of the ad and remembering this ad is 1/3 the length of an episode of Family Guy and its for a brand of Scotch I've never tried because I consider it overpriced, and already have my favorite brand of Scotch.

Though now that I see the productions values on this ad I see why Johnnie Walker costs way more than I think it is worth. Think about how much money per bottle must go into Walker's advertising, especially when you consider they somehow found six minutes in a row in Scotland during which it was not raining, which means they must have had the whole crew for this ad camped out in the highlands for the better part of a year, trying to do this one long take and being constantly interrupted halfway through by rain, or snow, or lightening, or sheep falling from the sky.

Compare this to Glenfiddich's entire ad budget of the year 2010, which consists solely of 2 items:

1. Print labels with the word "Glenfiddich" on them, adhere to bottle so customer knows which bottle to buy.
2. Taste amazing so customers choose to buy bottle.

So I guess you can add a third item to that list:

3. Convince Bill Tucker to drink Glenfiddich. Have him be awesome and spend most of the 1950's jumping out of airplanes. Repeat.

You may be thinking to yourself right now, "He drinks Glenfiddich because a paratrooper he knows does? That's not a very good reason."

To which  I respond: You clearly have not met Bill Tucker.


Footnote(s)
*I guess he is sort of the Scottish Chirstopher Walken in that respect. Though I think Chris Walken himself is somehow the Scottish equivalent of Christopher Walken, though mostly only in the movie "Scotland, PA" where he plays MacDuff as William Shakespeare originally intended him.

I mostly added this footnote so I could state for the record an idea i've had for a while (with additional material provided by C. Kevin Mauer):

There needs to be a buddy cop movie starring Christopher Walken and Williem Defoe. And in this film Christopher Walken needs to do a Williem Defoe impression the entire film, and Williem Defoe needs to do a Walken impression the entire film.** I don't know what the crime they would be solving would be and I don't really care, you could remake Stop! Or My Mom Will Shoot! for all I care, and as long as it has those two guys doing impressions of eachother while solving a crime and shooting stuff it would be the best movie ever.

**This screen story copyright 2010 Strictly Commercials
Posted by Danny at 12:56 AM