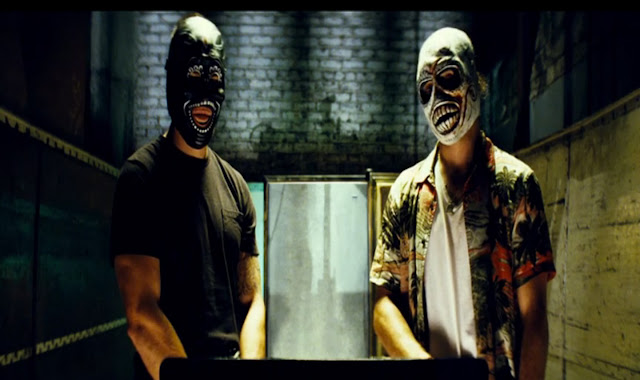 I've said before that Colbert was right, a lot of movies this days are perfect in their 3 minute short film trailer form, and can't live up to the promises of awesome provided by the trailer.

I am pretty sure the upcoming film Savages will be one of those. The trailer features:

-Pretty much the plot of Commando, except its it is two dudes rescuing the girl they both sleep with, instead of Arnold rescuing his daughter and saying awesomely corny lines like"Boy George, more like GIRL George"

-Narration by Blake Lively that is so overwrought and on the nose you could insert it over the trailer of any Jean-Claude Van Damme movie and it would not seem out of place.

-the always awesome Benico Del Toro as some kinda mafia heavy/ assassin who says no lines in the trailer but just lears at people and blows a bunch of weed into Blake Lively's mouth in a shot that seems to go on for half the trailer's length for no apparently reason.

Since this is directed by Oliver Stone who wrote Scarface but seems to think of himself as some kind of social commenting auteur, I fear this won't be the all action and melodrama roller coaster ride I'm promised from the trailer. I think Stone, despite all his pretension, would have been a much more successful director if he had realized that he is at his best when he takes B movie elements and films them with ten times the budget and everything cracked up to 11. He could have been a great (though still a racist dick)  Renny Harlin/Michael Bay type of filmmaker if stopped spending the majority of the runtime of his films trying to show how clever he was by making ham fisted observations about society.

Hopefully this will actually be fun, and match the movie I've already imagined based on the trailer where Benico Del Toro's character doesn't talk at all and comes across as the most hardcore and menacing baddie since Javier Bardem in No Country for Old Men.

If not, hopefully it will bring about some B-movies involving hardcore looking dudes running around shooting stuff while wearing cool looking custom painted masks.