The Old Spice Guy is back

This has been out for about a month, but I only just saw it and felt the need to relay it to you. (Yes YOU specifically.)

Old spice did a follow up ad to the greatest ad ever. It would be impossible to top the original, but they did a good job thinking of an other series of clever scenes for the man your man could smell like to walk through.

I also found an equally not new video of the Old Spice Guy on The Ellen DeGeneres Show.

(Wow, I have to pause for a moment. I've always thought Ellen was really awesomely funny since the 1990's, but apparently had never in the history of myself had to type her name out until just now. I failed trying to spell it and had to google it to find the spelling and for some reason am currently standing here* mesmerized by the fact that every other letter in her last name is the letter E. I can't think of any other celebrity whose name following such a stringent pattern.

We now return to your regularly scheduled programing, already in progress.)

The guy, named Isaiah Mustafa, is apparently a former football player and hopefully future star of a movie length version of this commercial. Its a pretty fun four minutes. Mustafa recites the script from the first commercial at Ellen's request, which is somehow even funnier as a dramatic reading without the background action.

Isiah Mustafa** just generally comes off and polite, and charming, and a man we should all strive smell like. Yowza I didn't realize how in love with the Old Spice Guy I was till I reread that previous sentence.


Footnotes:
*I do all my typing while standing up in the center of my room staring at a poster of David Hasselhoff***. It causes my prose to be of higher quality because I picture Hasselhoff judging me if I write something that would not be worthy of being read aloud by him while he dances to his own cover version of "Hooked on a Feeling." (The music video of which was recently declared as the result of a 20 year study by John Hopkins University to be the greatest thing ever created by humans or animals.)

**And how bad ass of a name is Isaiah Mustafa while we are on the subject? If he is ever in a movie where is plays a hardcore Bullet Tooth Tony style character the writer will have a tough time thinking of more Samuel L. Jacksonesque name for the character than Isaiah Mustafa. (Sort of like how Spill.com pointed out that Rupert Grint sounds much more like the fictional name of a Wizard than Ron Weaselly does.)

*** (A footnote inside of a footnote! Is your mind not blown. This like something out of Inception.) I would be remiss if I did not point out that my fictional poster of David Hasselhoff is obviously this poster: 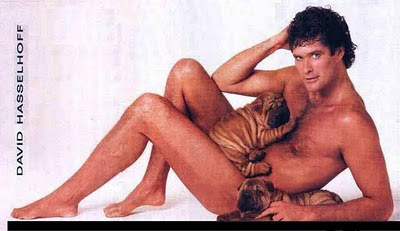