I think the worst commercial I saw this year up until now in terms of a money spent to suck ratio was that Dodge commercial during the Super Bowl who message was: Women suck so buy a really loud car. This ad was so obnoxious and insulting in its attempt to appeal to the mentality of a regular Joe American, that I assume it was actually an satire, or Dodge trying to win some sort of sick bet by trying to prove false the old adage, "nobody ever went broke by underestimating the public's intelligence."

But today we have a new winner of the prestigious "Strictly Commercials' Award for Worst Advertisement By a Company Valued At Over 25 Billions Dollars Award." Called the SCAFWABACVAO2BDA for short.

The coveted whoopie cousin shaped trophy that accompanies this honor goes to...
Proctor and Gamble

For the recent Pringles Banner from their company. (Pringles is owned by Procter & Gamble, which itself is a subsidiary of the Shineheart Wig Corporation.) Here is the ad reprinted below. I apologize in advance for giving it this opportunity to molest your eyes. 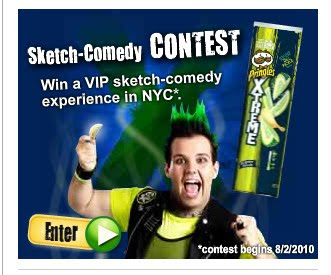 Everything about this ad is unspeakably awful. the product itself is called "Pringles Xtreme." I thought everyone on earth agreed about 5 years ago that calling products "Extreme" to try to appeal to young people was idiotic and would only result in snickers, but here is Pringles fighting the good fight to keep that cliche alive.

Also the product isn't just extreme. its Xtreme. Its so too extreme to star with a wussy letter like E, its so extreme it must start with an X to show its intense extremosity.

All I'm gonna say about the person that have pictured in the ad, is that I have honestly never wanted to punch a product model in the face more than I want to punch that guy in an effort to wipe that smug expression off his face. And hair haircut is only intensifying my hatred.
Posted by Danny at 8:21 PM