I think Craig Fegurson is easily the funniest person on network television right now*. Here is a clip from he show from about 3 years ago where he did a fake ad for a Japanese Whiskey. (I spell it with the "e" to honor my Irish relatives.)

This is one of the many jokes Craig has made in tenure on the Late Late Show about his alcoholism (he has been sober since 1992). I have a lot of respect of a guy who can make self deprecating jokes about actual problems in his life, it takes of bravely to be that open to strangers and a lot of ingenuity to make things he talks about (especially in his stand up) like drug abuse funny, while still being poignant, without being depressing for the audience.

Wow, that last paragraph got way to analytical and serious. I better end with something funny. I know. This isn't an actual ad obviously, but I would buy the hell out of any company that decided to use Jake Gyllenhaal enjoying his lunch to promote their product. Maybe PotBelly Sandwich Shop can start using these on billboards or something.** 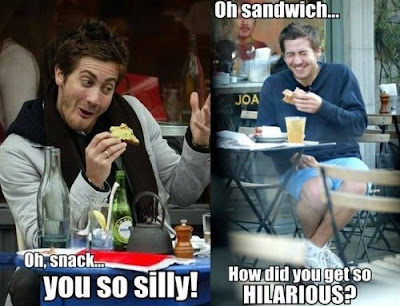 Footnote(s)
*In include the modifier of "Network" because i would say the folks involved with the Daily Show and Colbert Report are just as strong in their comedy.

**I admit it is very unlike that either of the sandwiches that are making Mr. Gyllenhaal so happy are from Potbelly since they have not stores West of Texas at this point. But if you have ever PotBelly's Wreck sandwich with bacon you will understand why I decided it was the sandwich most likely to make someone that exited.

This post apparently just became an ad for PotBelly's. This also just because a post I will not be able to reread without getting very hungry.
Posted by Danny at 12:45 PM