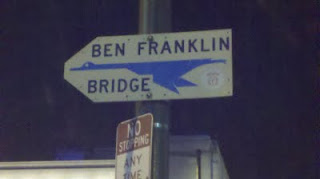 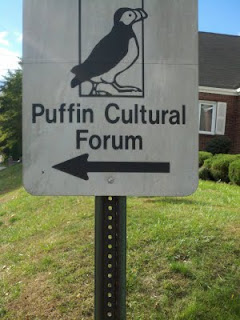 Here are two random signs with birds on them that I know nothing about. The one with the bird being used as an arrow is from outside of 30th Street Station in Philadelphia.
Apparently actor Kevin Bacon's father was the city planner for philly for most of middle of the 20th century. That appears to be the era this sign is from, so I am gonna give him the credit /blame for using geese arrrows to help people find their way around the city of brothery love.
The puffin I saw in the northern suburbs of New Jersey. I have not idea what the group he is promoting is about, so I will assume it is a bunch of puffin dressed in costumes who do one of those "dinner party murder mystery" games with you.
(sent via cell phone)
Posted by Danny at 9:20 PM