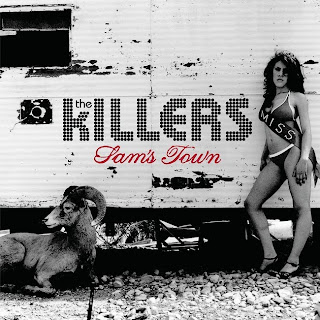 Katherine Heigl and Ashton Kutcher, besides being two people whose names I have no idea how to spell, are starring in some movie with the most annoying publicity I have ever seen.

Its called the Killers, and I was forced to endure a five minute "making of" and a two minute trailer while I was innocently trying to watch Iron Man 2 on Friday. It combines an actress I can't stand (she was even terrible in Knocked-Up, that movie was great but it would have been so much better if Anne Hathaway hadn't left the project) with an actor who I actually found funny on That 70's Show and has been doing everything in his power to become the personification of smugness since then.

As if seven minutes of the Heigl-monster weren't bad enough, this film now has a poster at the entrance I use for my subway stop. I'm not going to actually display the poster here, since I like being able to go to my own blog without screaming in pain.

This poster features both actors (not the right term for them but I can't use the proper term to describe these two and keep this blog PG-13) standing holding guns. Kutcher actually surprisingly not that obnoxious on the poster, the way he poses doesn't give me any desire to see the movie, but it doesn't make me want to go back in time to stop him from being born like Heigl does.

Heigl seems to be using all of her very limited acting ability to create the most annoying tableau every created. From her annoying shit eating grin, which is a new criterion in shit eating grins, to the way she is holding the gun likes its a used condom she just found. I'm not sure course enough sounding words exist outside of Welsh spoken by an East German to describe how much I disdain everything about Heigl's expression and pose in this poster.

Here is a link to the poster. View it only if you have some desire to be less happy than you currently are.

I'm going to quickly write another poster about the ads at the autoshow to get Heigl's demon face out of my head.

PS because I am immature I added the following sentence to the wikipedia article on this movie:
When this movie was shown to lab rats it caused them all to commit suicide. [2]

(I put that link to an article about lab rat deaths in hopes it would keep the edit up for longer, since I cited my sources, but it didn't work it was gone within two days. Apparently someone is intently monitoring the wiki page about this movie, probably Heigl's mom, the Grendel.)
Posted by Danny at 10:56 AM