I was really curious about what Toyota's pitch to the auto show attendees would be, In April around the time of the show they had just been given the largest fine ever given to an automaker by the U.S. Government. Toyota at the show went with the approach employed by the Pirate Captain in The Pirates! In an Adventure with Communists and just ignored the problem and carried on as if they were still every person over 40's vehicle of choice (This is not a stereotype, Toyota's average owner's age as of a few years ago was 43).

Their section consisted of the usual auto show assortment of rotating displays, and bad actresses in business suits over enthusiastically telling you how purchasing the car behind them will solve all of your life's problems. There was one thing they did differently though. Near the end of one of the be-suited failed actresses speeches, she pitched people on going over to the Toyota Avalon display to watch the next person stand in front of a car and talk about it. But, apparently the next Avalon display was a little different. The Avalon display was not a display at all, as the women informed anyone in earshot, it was a lounge.

How was this circular area with a rotating car in it a lounge you may ask? Well apparently it had some black pleather seats in it that looked like the kind of furniture that a propaganda video made in the mid-1970's by the U.S.S.R. might have used to represent bourgeoisie Americans in a Jazz club decadently listening to "hip" American music. But fear not, Toyota decided to show that were not out of touch by providing a hip band to play background music in their "Avalon Lounge."

And while live music was a nice touch and definitely caused them to stand out from the other displays, Toyota choice a really stuffy string quartet whose last gig was probably the New Years party held by Christopher Walken in the movie Batman Returns, which you could tell was hip, because Walken was dressed like this: 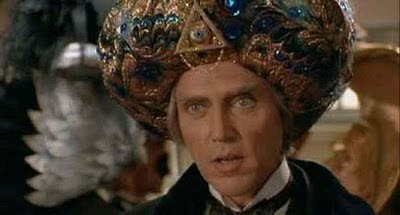 (Walken was technically playing a character named Max Shreck, but was really playing Christopher Walken. Actually specifically he was playing the same version of Christopher Walken he played in A View to a Kill, where his name was Max Zoran, which i think we can all agree is a much better name than Shreck. And not just because Shreck is only one letter away from Shrek. Though I'm sure thats a part of it. Those last four sentences were apparently written by Andy Rooney. Cracked has a whole article about Walken ripping himself off.)

So yeah, Toyota isn't exactly trying trying change their image as the official car of middle aged accountants. And maybe with the current turmoil they face over transparency and reliability, that is a good thing.

(Before we move on This might be a good time to explain that I don't have any pictures of the Avalon Lounge because I kept falling asleep trying to take them. (you see because the display was boring. Rim Shot.)

But Scion, the brand they created specifically to appeal to young people must have had an uber-hip display right? Actually it came across much more like the pensioner who designed the Avalon Lounge was asked about what the young people were into. And he had once watched the ads during an episode of Teenage Mutant Ninja Turtles with his grandson during the late 1980's. The designer/Ginkgo biloba enthusiast had seen an ad for mircomachines and decided that they were what all the cool kids were into. So he had them build a micromachines playset to store Scions in. Except because Toyota's display designers were involved, they decided to take this idea and make it more boring then you ever thought imaginable. Which is how, one assumes, they created this display: 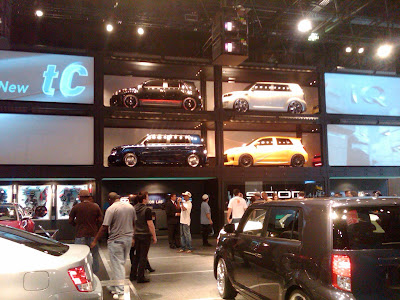 Cars! Stacked up vertically, a little bit! with some projection screens! This is what the kids want! Those kids with their skate boarding and their hip-ity hop, and their wireless telegraphs!
Posted by Danny at 12:56 PM