Yes only a month after it occurred I'm finally posting some more about the advertising awesomeness and foolishness at the 2010 New York Auto Show. This blog is nothing if not punctual.

Part of the display for Mini consisted of two Minis being restrained, one with a leather dog leash and the other with a thick rope. 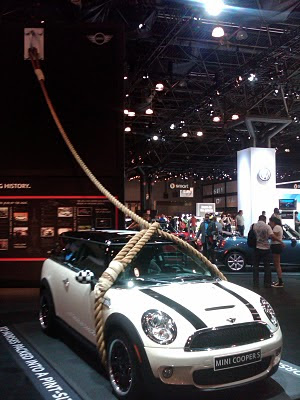 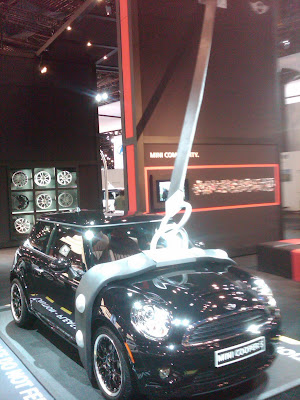 When I first say these the only thing I could think of for the Mini in the leather collar was the Mini was trying to appeal to bondage enthusists.

The one with the rope around it, especially with the leather collared Mini already establishing that that part of the Mini was supposed to be the neck, made me think Mini was showing one of their criminal cars being hung at the gallows.

Obviously neither of these impressions are what Mini was going for. In terms of the "gimp Mini" I'm sure that's just me being dirty, but I think the mini with the noose might actually give that impression to people besides me.

Mini cleared things up with slogans explaining each design on the ground on the side of each display, which you can see partially in the above photos. The Mini with the studded dog collar said, "Please Do Not Feed" and one with the rope said "172 Horses Packed into a Pint Sized Corral." The Horses slogan is particularly clever with its horse power pun. Reading the slogans the viewer garners that since mini put a dog collar and leash on the mini that was supposed to be a dog, they wanted to put something horse related on the mini with the horse slogan. I guess putting a really big saddle on the mini would have not shown off the car's looks as well, but i have been thinking about the display for a while know and it just dawned on me that the rope is supposed to be a lasso. Maybe I'm just exceptionally think, but I think even with the horse analogy the rope still doesn't scream "lasso." And I think a rope with a slip knot in that is mounted vertically high above the object it is around is much more associated with a hanging than it is with horses. Maybe they were originally gonna go with a slogan like, "Judge Roy Bean ordered this outlaw car be hung by the neck until its fight stop a-kickin" but then realized that was a bad idea and back tracked with the rope being a lasso.

So creative ads, but not in the ballpark of the clever magazine ads mini has had since their debut, such as fake parking tickets to give people's cars which compliment their car on being cool, and their ad with suggestions about what to paint on the white top of your Mini.

I couldn't find either of those ads I just mentioned by google searching, but I did find this ad, which isn't quite as clever but gives you an idea of Mini's print ad design scheme. 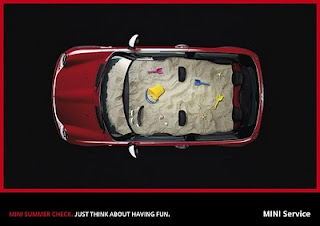 Mini ads with their black backgrounds and minimalist approach make Mini one of only two car companies I can think of that has had a recognizable template for their ads for as long as I can remember. Indeed the only other company I can of that has ads as recognizable for their layout is Porche.
Posted by Danny at 11:29 AM