Yo Ho Ho and a bottle of Rum 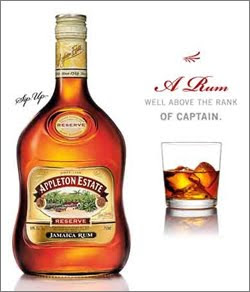 I saw this Appeton Rum ad on Lafayette and East 4th street in Manhattan, and I enjoyed its dig at Captain Morgan's rum quite a bit.

I like this ad a lot, but I do not think it is an effective ad. It is definitively a funny and clever ad. But I couldn't remember which rum it was trying to convince me to buy a mere 14 hours later, and had to spend 20 minutes of fruitless google searching-apparently typing in "captain" and "Rum" will not help you find this obscure ad making fun of Captain Morgan-before I remembered the brand had the word "apple" in their title.

So in terms of an ad that causes me to remember the brand it fails miserably. But its funny and generates interest and should at least drive up the sales of Appleton rum in the large liquor store a half a block up from where the ad is on Lafayette, since there folks will only have to remember the word Appleton for 90 seconds instead of 14 hours.

Appleton trying to knock down the mighty Morgan brand a peg(leg) or two reminds me of a quote from my friend Ken, whose interest in billboards was one of the inspirations for this blog. Ken was explaining to me why he only drinks Sailor Jerry Rum, and stated, "Sailor Jerry kicks Captain Morgan's ass. Who would you rather buy your rum from, an actual historical bad-ass sailor and tattoo artist, or some damn cartoon pirate?"

Though I think Gosling's Black Seal Rum from Bermuda might have all of the aforementioned rums beaten in the "bad-ass endorsement" category. Gosling's is the drink of choice of Robert Shaw's character in the 1977 movie The Deep. Shaw in this film, like in most of his roles, spends 90 percent of the movie smoking and drinking and punching people all while talking in an accent that is 1 part British, 1 part Irish and 50 parts pirate.

I just looked it up and he apparently plays a character called Romer Treece, but really he is just playing a slightly less insane and more handsome version of Shaw's portrayal of Quint in Jaws. At no point in The Deep are food or water seen touching Romer Treece's lips. The man lives entirely on sea air, cigarettes, and first and foremost Gosling's Black Seal.

How hardcore was Robert Shaw? Well he was recently voted "The Coolest British Guy to Walk the Earth" by Jason Statham's Fists Quarterly.

Since words cannot adequately express how awesome Robert Shaw is, and therefore how awesome he makes Gosling's Black Seal just by drinking it, I have provided you with the following handy photographic evidence of the fact that Robert Shaw is the man.

Here is a picture of Mr. Robert Shaw. 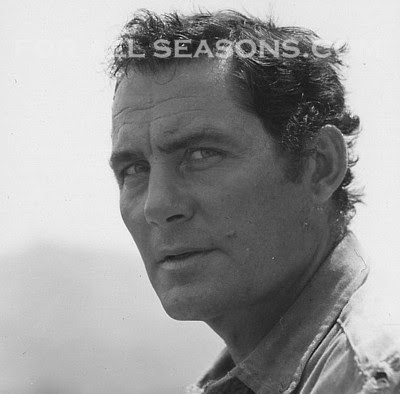 And now here is Mr. Robert Shaw on the same day one hour later when he discovered the director wanted him to have facial hair for her role: 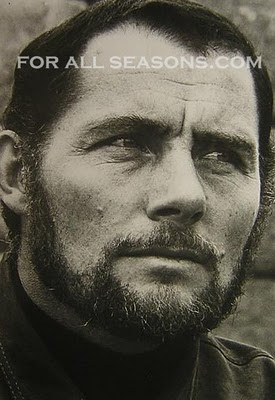 (Robert Shaw photos lovingly stolen from the fantastic site Robert Shaw for All Seasons. Where you can go if you want to learn actual factual information about Mr. Shaw.)
Posted by Danny at 1:17 AM