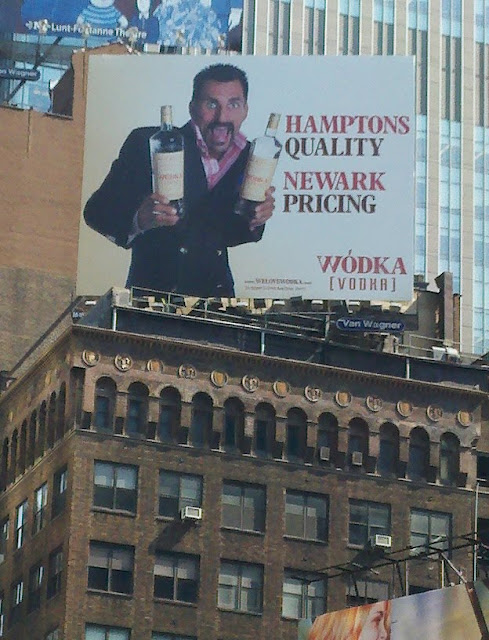 Here is a Times Square billboard for a vodka brand called Wodka Vodka.

The slogan is kind of cute and gets across the fact that it is cheap, but the reason I am bringing this ad to your attention is their awesome spokesmodel.
That guy looks like he is having more fun on that billboard than any man in the history of photograph based advertising.
The goofy grin, and 1970s cloths remind me of that hilarious "wild and crazy guys" sketch Dan Ackroyd and Steve Martin used to on Saturday Night Live, back when both those guys and all of that show were funny instead of painful and terrible.
It may be just me but, I would really want to have a drink with those guys, so the idea of an Eastern European of the same mold being the pitchman for vodka makes me inclined to try the band.
I think this ad works best if you picture that guy walking in the door at a party. As soon as you see him with that goofy grin, holding those bottles so excitedly, you know he is there to have a good time, and that no matter how much fun you already thougt you were having, your is now going to be so fun that you will start pronouncing all the "v"s in the words you say as "w"s.
So basically this is a russian and 1970s themed ad for one of my favorite types of alcohol.
The only way this ad could contain more things i dig is if it somehow found a way to incorporate Aquaman and Groucho Marx.
Or if the text next to him simply read: "the wodka of choice for wild and crazy guys."