This tire ad will garrote your eyeballs

So I've been meaning to write a post about Michael Bay's recent Victoria's Secret commercial, because it really is the ultimate Michael Bay production. It combines his love of explosions and cleavage and shooting everything at sunset without having to worry about annoying things like plot or Shia Labeouf. But that can wait till later, because right now I have to share this other commercial with you, mostly because it's not fair that otherwise I'd be the only one having nightmares about it. I came across it through the fake Michael Bay twitter, which I read, even though as I've said to everyone ever how much I hate twitter. I hate twitter because I really don't care about mass messages from people about what they are up to at the moment, but the fake Michael Bay is not about what anyone is up to, it is one liners about what Michael Bay would be up to right now if he lived his whole life like that Verizon commercial he starred in.

I understand that it's a bit silly of me to condemn all of twitter except for one account, but if other accounts only updated once a week and consisted updates like this: "Take off the brakes and make it a fixed gear. I want this to be the kind of Ferrari that kids in Brooklyn would drive," I would probably change my opinion of twitter.

Now would probably be a good time to get around to the commercial I was going to discuss this entry. The fake Michael Bay linked a commercial accompanied only by the text, "People, listen to me. This is how you sell tires." That really did not prepare me for what was to follow. Although I don't think anything could have prepared me for what was to follow. Just watch (though be warned once you watch this commercial you will be henceforth numb to human emotion.)

Dunlop tires, the official tire of David Lynch's pearl farm, is I assume what they were going for here, since I just re-watched this twice to try to make some sense of it, and the only thing I noticed, other than the fact that I was screaming in horror the whole time I watched it, was that there are all those silver balls everywhere, and at one point the scary painted dudes are grasping along in a body of water. So I'm going to go with a "these are all employees at David Lynch's pearl farm" theory, and assume that's him in the black sports car coming to check up on his workers.

I'm really not sure how this seemed like a good way to sell tires at any step of the creative process. My Dad and I always make fun of those Pontiac commercials where it shows the car doing doughnuts through the desert the whole time, because the ads are basically admitting, "there is no reason to buy this car unless your daily commute involves a drive through unpaved portions of death valley." And this commercial takes that concept to new extremes. "Do you need tires that won't lose traction even when you run over millions of metal balls and several performers from Cirque Du Soleil? No? okay, well then buy any other brand of tires, Dunlop is useless in snow or rain but great for driving near fat guys painted gold."

It's one thing to create a brand image instead of focusing on the actual advantages of your product in an ad, it's another thing to have the brand image you create be one that instills discomfort and fear into the consumer.

(A brief side note I couldn't find a place for or think of a joke about: This ad was directed by the director of American History X. It came out in 1993.)

That cat-eyed women at the end is quite probably going to haunt my nightmares for the next several forevers. Here is a still shot of her for your viewing pleasure. I assume if you look at it for more than 30 seconds she sucks out your soul and uses it to make rubber. As I said at the beginning, this wasn't so much a post to be enjoyed as one designed to make sure other people experience the same trauma that I am. 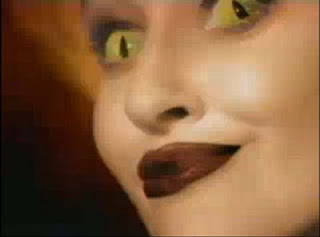