This trailer is badly edited

I think cutting a trailer for a comedy may be the hardest genre to promote. A lot of really great comedy's out there don't have one liners that work out of context.

Remember the terrible trailer for office space? They showed them beating the fax machine and Diedrich Bader's classic line, "two girls at the same time." But both gags, which were hilarious in context, seemed truly dumb as 4 second beats in a trailer.


I am hoping this film "Goon" is the same way. It clearly aspires to be a good old fashioned dumb violent comedy about my favorite sport to watch* and I will see it because, Liev Schrieber is awesome and Hockey Goons are awesome.**

That said. This trailer is crap. It shows too much of the girl who wants to have sex with Sean William Scott all the time. Which could be cute in the film but is just boring in the trailer.


They don't make it clear what the main conflict of the film is. Does Scott not want to fight? Does he want to fight but fails the team because he can't skate? Or is it really all just gonna boil down to one 2 minute fight scene between Scott and Schreiber like they hype in the trailer?


Why don't they let Liev Schreiber do anything in the trailer but glower and punch a wall?


In terms of what is actually wrong with the editing. Take a look at the seen at :35 seconds in. Scott punches an opponent into the glass and a little blond girl in the 2nd row of the stands gives him a thumbs up.


This is cute, and probably the best gag in the trailer. It is not done perfectly, they should have cut to a closer shot of her and she should have been even more enthusiastic with her thumb's up, since the whole point of the gag is the disparity between a cute little girl and her endorsing the bloody violence on the ice. But I will take it. It definitely contains all the elements of a joke.


Then for some reason we cut back to the guy bleeding on the glass, and then back to the girl. Except this time she has no expression whatsoever. This is not funny, there isn't even a joke here. If the guy had bled all over the glass and the girl had gotten even more jubilant. That would have been funny. Not a great gag but at least one that contained the elements of a joke. Instead it just looks like the editor assembled the trailer by finding scenes in the film he liked, and then using random lengths of footage from them.


Quick Bonus complaint: What is with the title cards in this trailer? They look like they are in the default font from 2003 edition of Final Cut Pro.


San serif, white text on a black background,  centered. I think the only setting they bothered to adjust was the make the text bold, which somehow makes it look worse.


I'm starting to think they had an 11 year old who was just starting to learn how to use iMovie put this trailer together.


Footnote(s):
* Actually I will broaden that. Hockey is my favorite thing to watch that does not have muppets in it. 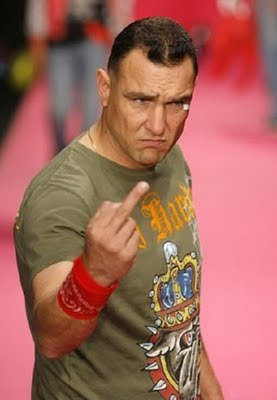 It just occurred to me that everyone on earth is not a Warren Zevon fan (he is most famous for the song "Wherewolves of London") so here is the song embedded below. Also even if you do know the song you probably want to hear now that i reminded you of its awesomeness.
Posted by Danny at 9:51 AM