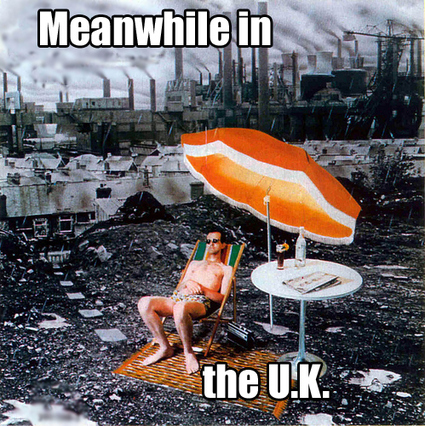 NOTE:
This article gets really political really fast. I didn't mean for it to, its just late and night so I'm more ornery than usual and this ad that i am talking about is really poor quality. If you don't think the BBC TV license fee is stupid and do thing that Ireland should always be two countries this might not be the article for you.

I am trying to bear in mind that this ad for "Holidays at Home" (designed to convince the people of Britain  to vacation in their own country as opposed to someplace where it isn't cold and rainy 90 percent of the year) is made by the same inept British government who still drives vans around pretending they can somehow use "secret technology" to tell if you are using the antenna attached to your TV to pick up the radio waves of the BBC without playing the stupid TV license;* But even with me looking at it from that level of marketing stupidity this ad is still so bad it makes me angry

Why do I dislike this ad oh so very much? Part of the reason is because it features celebrities I actually enjoy, like the classy Stephen Fry the adorable Rupert Grint and worst of all, dead brilliant (and Spanish) Salvador Dali's lobster telephone sculpture.


Part if it is the fact the ad seems very well produced visually, but that despite all this effort, it somehow fails photograph or describe a single damn thing worth seeing the United Kingdom, despite the fact that the British Museum alone contains enough mind blowingly cool stuff to occupy a person of a fortnight.

The only sight which they photographed it a way that showed off its beauty was the Giant's Causeway. And even this was ruined by bad writing "You won't find rocks like these." Calling the Giant's Causeway "rocks" makes it seem pedestrian and stupid, who goes on vacation to hang around rocks?

Also from a personal stand point, including the Giant's Causeway while very carefully not mentioning the word Ireland, even to say "Northern Ireland" pissed me off. I don't want to get into my opinion's on Ireland's relationship with England, but I personally would have liked to have seen both Ireland and Scottland specified as such instead of them all being lumped together.


Footnote(s):
*Just to reiterate that point, these stupid vans is BBC's primary method of convincing everyone who accesses over the air broadcast TV in England (the kind that is FREE in the US) to pay the government the BBC.  You have to pay this fee for owning a TV which picks up broadcast signals, even if you don't use it for watching broadcast signals or if you use it to watch broadcast but just watch stations like ITV who are not part of the BBC and therefore do not get any money from this license.

I don't want you to think I am against funding for the arts, and I love doctor who as much as the next guy, but I think both this licensing system and the goofy roving detector vans are antiquated and not something the government should be spending their time on when there are more pressing issues at hand. Like the fact that some members of the British military are allowed to steal military helicopters and use them to pick up their girlfriends to go on dates.


Also as long as I am complaining lest us for get that the government their still has censorship laws in place against movies and TV Shows, which are strict enough that an episode of "The Daily Show with John Stewart"  was banned outright in England last year for showing footage of parliament for use in satire. Which is apparent an actually crime (really) in the United Kingdom


via WarmingGlow, who just talked about how cute the corgi dog with Stephen Fry in the video is. This statement is accurate, though I would argue limited in its scope.
Posted by Danny at 10:45 PM