My absolute favorite commercial from this year's Super Bowl was the ad for the Kia Sorento. Though I have to admit I've had a soft spot for Kia ads since I was in middle school. This was back in the late 1990's when Kia only had two car models, the Sephia and the Sportage. I was trying to find the ads I remember from back then, but youtube failed me. As did google image search when I tried to find a kia promo photo I remember being in their booklet at an auto show which depicted a guy driving in the High Occupancy Vehicle lane with 3 blow-up dolls as passengers sticking his tongue out at the people stuck in traffic in the regular lanes, while visible behind his car are the lights of a cop car approaching.

Actually after describing that ad, I'm not surprised Kia has made an effort to keep it off the internet. But that was the whole thing I loved about Kia ads, was they weren't trying to sell on the coolness of the car. They admitted, "Our cars are just average looking, but isn't this commercial awesome and hilarious!"

Though I couldn't find the ads that I remembered, I did find a funny one I hadn't seen before from this same time period. Its for the Kia Sophia, which may have been the blandest looking car of the last 15 years. The only car I can think of off hand that comes close to it in terms of sheer boring is the Saturn Ion. The front of the Ion was described by Automobile Magazine Design Analyzer Robert Cumberford as "being only significant it that it is entirely featureless, except for the droop at the bottom of the head lights which forms sad tired eyes." 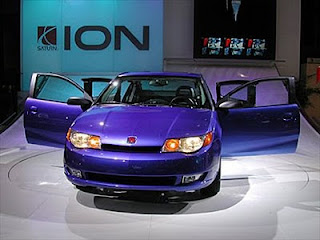 The Sephia was just as boring, but not in such an amusingly descriptive way. I assume Cumberford never published a design analysis of the Sephia, as he probably kept falling asleep immediately after sitting down to look at the car. How uncool was did Kias look in the late 1990's? In the Dave Barry novel Big Trouble, two teenagers have this exchange: "Why did your dad buy a Kia Sportage?" "Because right now he feels like a total loser, so he thinks he deserves a loser's car."

Kia overcame there cars looking like total dork mobiles by making ads that focused on comedy instead of shots of their car doing doughnuts through the Mojave Desert. I'm not sure when this Kia Sephia ad is from but they stopped making the Sephia in the year 2000 so this ad is definitely from the era I was talking about:

This ad, especially in the second half, does a great job making fun of the luxury car ads from this same era which consisted of this same, guy standing next to a car setup. Except those luxury care ads consisted of the actor describing how the car was everything you ever wanted out of life. Since the Kia Sephia is obviously not what anybody wants out of life, the ad is not only parodying that ad style it is coming pretty close to making fun of the car itself as well. That is what I loved about the old Kia ads, they basically sold the idea that Kia must be awesome and ballsy to make ads this goofy, and made you want to be a part of a car company that was willing to do that.


I think the Kia Super Bowl ad really did a great job of continuing that tradition, but on a higher budget and on featuring a car people might actually buy out of choice instead of because its cheap and has a 10 year warranty.

I have to be some where, so I will do a second post actually discussing the Kia Sorento Super Bowl ad on Monday.


What will Danny say about Kia's superbowl ad?
Will there be as many typos in monday's post as their normally are on this blog?
Where did Danny have to go to?
Did he perhaps have to go because he is coming to your house to sneak up behind you as you are reading this right now?

Find all this and more on Monday!

There will now be a medium long intermission.