My safe word will be whiskey- UPDATED now with 1000% more Ian McShane!

Jameson Irish Whiskey recently started advertising on MTA subway car trains, including the A train line near me, so I have been seeing their ads a lot lately. These ads tell "facts" about John Jameson, the Scottish founder of Jameson Whiskey, written in the first person such as, "The first tour of my distillery occurred when pirates broke in and drank everything in 1780." Here is badly framed photograph I took of one for demonstrative purposes: (The weird angle was me trying to get into the frame the awesome fake wood and bright orange seats that the MTA assaults its non-colorblind passengers with.) 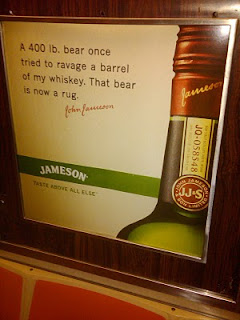 These are pretty funny, though I think the format is more than a bit inspired by Dos Equis's "Most Interesting Man in the World" campaign. In fact its similar enough and I like the Dos Equis ads enough that recounting the Jameson ad just caused me to go to the Dos Equis website and spend about 5 minutes fooling around with the different things they have their involving The Most Interesting Man. So I, and least in my case these Jameson ads only serve as free advertising for Dos Equis.

In case you were curious, the dude in those Dos Equis ads is Jonathan Goldsmith, an Egyptian-American actor who apparently guest starred on every TV show made in the 1980's, including Magnum, P.I. and MacGyver, in case you needed proof he is equally cool in real life.

I've just realized this post was about Jameson ads, so back to that: Despite the Jameson ads mostly getting me interested in wondering what else Jonathan Goldsmith is up to, they also did get me interested enough to want to look up whether they are real facts about Mr. Jameson.

Unfortunately it looks like they aren't. the New York Times has an article from back in September about the television commercials that are part of the same campaign. The rep from Jameson insists the ads are, "exaggerated, but based in fact", but in the same article David Altschul, a brand symbol expert, which is apparently an actual paying job, states, "[Jameson is] playing with the notion of authenticity: ‘There really was a guy, but this is not the guy.’ ”

The nail in the coffin for me was when I actually watched the TV ad. I'm really not sure why the New York Times dedicated any space to debating if these are supposed to be real facts. The ad is cute but ridiculous. Jameson fights a giant squid. Unfortunately the fight happens off camera, but here is the ad anyway in case you were curious:

Cute, but definitely a very different tone from the subway ads. The subway ads were more of a Johnny Appleseed type of folk tale, which exaggerated elements but an overall concept that seems like it could be true. The commercial is more like that Disney short about Paul Bunyan, with a five story tall man and his giant ox wrastling in Alaska to create the northern lights. Except not as awesome as that, because that the Disney's Paul Bunyan short is the bees knees. In fact, even though its not in anyway ad related I'm posting the entire short below, if only so I can find it easier next time I want to watch it.

On a final note, I thought I should explain that the title of this entry "Safe World Will be Whiskey" is a line from one of the two parts I actually found funny in the Andy Sandberg movie Hot Rod.

The second part I found funny being this exchange:
Dad (played by the awesome Ian McShane): Why are you wearing a fake mustache?
Andy Sandberg: All great men has mustaches
Dad: Yeah, but real men actually grow them.

Ian McShane, is you forgot the name is the amazingly classy and badass actor who starred in "Deadwood" among many other things.

Actually, Come to think of it, if Jameson is so desperate to sell even more Whiskey that they are resorting to these weird whimsical ads, they would undoubtably sell a fuck-ton* more Jameson if they hired Ian McShane as their spokesman.
footnote(s):
*Sorry to use metric units of measurement here.