Three posts after I announced I was going to, I've finally gotten around to discussing Michael Bay's one minute magnum opus to his two true loves: Tits and explosions. ("Tits and Explosions" probably would have made a good Frank Zappa song, it would have worked well as a companion piece to his song "Titties and Beer".)

I contend, much to the derision of everyone else I know who has ever seen a movie before, that Michael Bay is actually a good director in his only particular way. He obviously only directs action driven explosathons, and from the little I've seen of his film Pearl Harbor he does drama and history about as well as the folks over at Drunk History, but as long as he sticks with what he knows, I contend movies are better photographed than pretty much any other summer popcorn movie, and astoundingly engaging since they contain stuff like Sean Connery getting into a fight with a moving San Francisco Cable Car, and somehow causing it to roll down a hill sideways and crash into a Ferrari. But don't take my word for it, which this severally shortened version: (yes the clip i found of this 3 minute scene online was a 45 second edit of "the best of this scene", Michael Bay obviously over estimates America's attention spans.)

You really can't even fault him for being over the top because he does over the top so often and so well. Case in point: that the scene we just saw actually occurs in the first 15 minutes of The Rock, and everything only gets bigger and more explodey from there.

This whole idea of starting at the total extreme and then escalating nicely encapsulates what is so great about his Victoria's Secret ad that I am actually going to start discussing now. Lets watch it first so we are all on the same page:

This really is the prefect outlet for Michael Bay's directing style. People complain that he cuts to a new shot every 1/4 of a second? Lots of critics complain the shots in his movies are so short it seems like a commercial, but here you can't complain about that because it actually is a commercial. People point out that shots of cleavage gratuitously occupy all the non-explosion portions of his movies? Can't complain here, its an underwear ad, the only way it would not be full of boobs would be if it was directed by the guy who did the Dunlop Tire Ad I showed a few days ago. Then the ad would have just been shots of two midgets dressed as the Red Baron jousting each other whilst riding llamas, and then 2 seconds at the end saying, "Victoria's Secret: We Probably Sell Stuff." And I think we can all agree Michael Bay's approach is easier on the eyes and won't cause you to wake up in the middle of the night screaming.


Even with this being a commercial and with women in underwear being a given, Micheal Bay still managed to ratchet this up several hundred notches above where any other director would have taken it. There are women in underwear getting out of obscenely expensive classic cars in no fewer than three shots; a woman straddling a giant motorcycle, a women being pursued by a helicopter, women walking through a circus with people eating fire, breathing fire, and juggling fire, and hanging from trapezes (strangely enough NOT while on fire); girls throwing knifes at each other; girls looking mistrustfully at a World War II era plane; and a girl climbing up a spiral stair case which leads from nowhere to nowhere in the middle of the desert.

I haven't even brought up yet the Bayiest element of this whole thing, that random shot of the girls posing with a stupidly huge explosion behind them. This part: (in case your mind had been so blown by it that you have forgotten.) 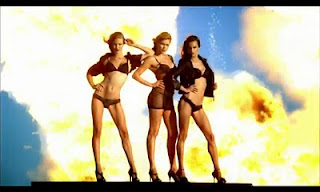 The more stuff created by Michael Bay that I experience the more I think that Verizon commercial I posted before might really be what he is like in real life.

To provide some context I decided go back and look at a few of Michael Bay's old commercials from the early 1990's when he had only made commercials and music videos. Bay actually created the first ever ad for the "got milk?" campaign. Though a commerical more foreshadowing his illustrious explosion and skin filled career which was to come is a Levi's ad he did. Its about two strangers in an elevator together who mutually fantasize spending their whole lives together, but Bay decided what it really needed was the scariest half second shot of a preacher of all time. In this shot the reverend presiding over the couple's wedding in their dream jabs his arms toward the heavens with such seriousness that he seems to be indicating that this wedding will bring down hell fire on all of humanity. This immediately fades to white in the most frightening manner possible. here are two screens shots that do not adequately capture his scariness: 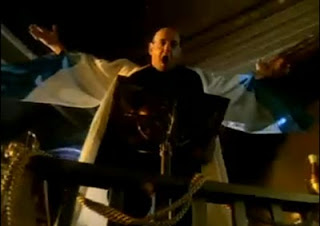 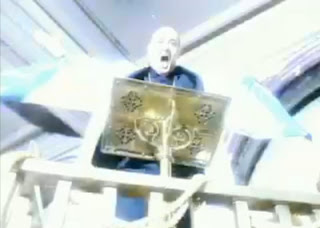 Then in the next shot, instead of candles, their wedding cake cake has the biggest sparklers ever created by god or man. What I'm trying to say here is now I really want Michael Bay to plan my wedding.
Bay: "I envision the church collapsing around you as a herd of wild horses stream through the chapel, the horses will be on fire, and their will be women in corsets riding them, and it will be good!"


(Oh and for those of you who checked out the Got Milk commercial directed by Bay. You might want to watch this pretty funny parody video I found when trying to find the youtube video of the original. Here is the parody. )
Posted by Danny at 2:53 AM