So I was in Boston the other day and at the bus stop in front of the aquarium, there was an ad that was actually a Plexiglas container full of coffee beans. This claims to be a Starbucks ad but which I'm worried it is actually really bad modern art. Here are some photos of this foolishness.

First off here it is in context. Its in the space normally occupied by ads at a bus shelter, except instead of being filled with halogen lights to light up the ads on each side some jerk filled it with coffee beans. 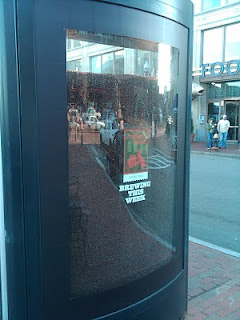 Here is a close up of the coffee beans so you believe me that they are actual beans: 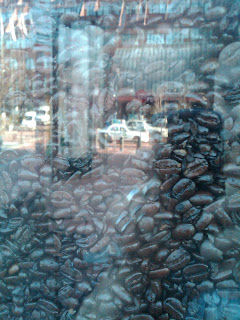 I guess I can't complain that Starbucks is wasting a massive amount of food here since according to those calorie facts they have posted on the menus of New York branches of chain restaurants, coffee only has something like 5 calories per 30 ounces of liquid. In spite of this not actually being a waste of food but rather a waste of non-nutritious plant seeds, it still rubs me the wrong way. Maybe its because starbucks charges like a million dollars for a 8 oz coffee, and yet here they are filling a whole bus shelter with their beans. Maybe they could not fill random municipal structures with beans and pass the savings on the the consumer.
Posted by Danny at 11:56 PM