I'd buy this car right now if it meant I got to hang out with these dudes. (Kia Post Part 2)

(This post is two days late using my self created deadline, so apologies if anyone was waiting with bated breath for this.)

Kia's Superbowl ad, as I began discussing before, kept their fun goofy company image they have had since before their cars were worth buying, but now got to pair it with a product that is actually nice looking.

I won't spend too much time gushing over how simultaneously cute and awesome I find this ad, since as I stated in the first post I'm biased towards Kia ads. That said, here is some gushing: The set of five toys is pretty genius. We have characters who all look really cool but all realistically could be children's toys. Also they are all maximally awesome, I mean look at this handsome group: 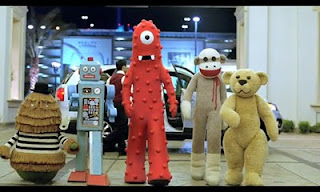 Just try and tell me you wouldn't want to roll with these guys. I think that's the underlying thing that makes this ad so effective. The Honda Element ads when that car first debuted, showed cool guys in their mid-twenties skiing and hanging out in a hot tub, and they seemed forced as they tried and failed miserably to be hip and edgy. Actually come to think of it the microwave on wheels look the car itself sported pretty much gave of the same "failing so hard at being cool" vibe, so at least the ads were honest.

Thinking back on it, those lousy Honda Element ads actually initially aired during that ill fated NBC weekend update special that aired opposite the Superbowl Halftime show in the early 2000's, so those 15 minutes were pretty much a cornucopia of companies failing to capture the attention the youth of America.

So Kia takes basically the same concept as a bad seven year old Honda ad of a bunch of cool guys hanging out subverts it by making the guys a robot a weird knobby thing, two stuffed animals, and some kind of ball of hair wearing a hat. It goes from being the fake hipness of the old honda ads to awesome silliness that actually succeeds in being cool by being so ridiculous.

A sock monkey getting a "tattoo" stitched on, and doing a 1080 on a jet ski are images that will just inherently make anyone happy. If the Grinch has seen this ad at some point before the events of How the Grinch Stole Christmas, his heart would have grown 5 sizes on the spot and Seuss's book would have been about a green jolly creature who came down from the mountains one year and has been helping the Whos decorate and cook roast beast ever since.

Another short image that ads to the equation wherein this commercial equals awesome cubed, is the one of that little hairball thing rolling around in the snow. I love how that thing has no face but is has a hat and a stylish little stripped shirt. I love how its trying to make a snow angel but can't very well because nothing it has really counts as limbs. I want to hang out with that thing immediately. (3 second video below just of that part of the commercial.)


In a final only vaguely related point, the Kia's offical Kia Sorento channel on youtube (yes such a thing exists, it only contains this advertisement and two teasers promoting this commercial) doesn't use the word "Super Bowl" anywhere except in the search tags. I thought this was weird and it caused me to remember that a local radio station in DC when I was in high school was giving away Super Bowl tickets and making a big joke out of the fact that they kept getting cease and desist orders and treats of lawsuits from the NFL for saying the word "Super Bowl" on air.

I kinda just thought this was a joke at the time, since the station (DC101) had a history of morning show hosts who get sued or get FCC fines, but after doing exhaustive research by clicking a link in the Super Bowl's wiki article I discovered that the NFL does get its panties in a twist about people using the words Super and Bowl immediately following one another. According to the Hollywood Reporter's Media law site, which I just discovered existed 2 minutes ago (Thank you Wiki for teaching everything worth knowing), pretty much no one can use the phrase Super Bowl, ever. the article states, "Uses of the terms 'Super Bowl', 'Super Sunday', 'NFL' and team nicknames are off limits in any type of marketing or other attempt to create 'the appearance of a relationship.'" So even though Kia paid a bunch of millions of dollars for their minute long spot during the Super Bowl, they had to promo their ad by saying it aired during the "Big Game," which sounds like the pornody version of the Super Bowl. (Sample dialogue: "Oh Peyton, your game is so big!").

Oh well, as Joel Grey pointed out, money makes the world go round. I can't believe I just referenced a Liza Minnelli musical. I guess I might as well post the video for it now, so it can be stuck in your head as it is stuck in mine.

Funnily enough the only video of that song in the movie version of Cabaret that I can find doesn't allow embedding on other sites, which i guess was the poster's merciful way of not further inflicting Liza Minnelli's scary visage on the world. So instead here is a vastly superior and Liza free music video of Joel Grey on the Muppet Show singing "Willkommen".

I'm not sure how this blog suddenly became the show Glee. But I would like to note how un-masculine I made a post that was sort of about the Super Bowl. But I'd rather have Muppets and cute sock monkeys than be manly.
Posted by Danny at 4:20 PM