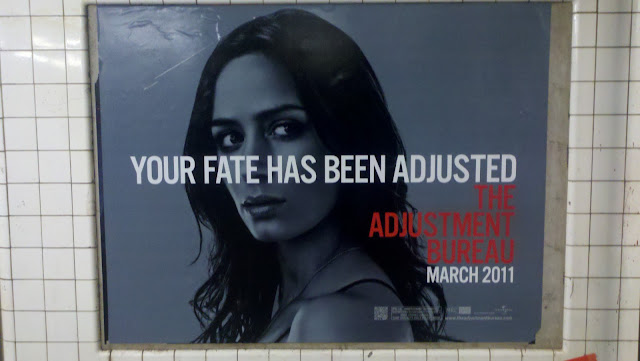 I first saw these new ads for the Emily Blunt Matt Damon film Adjustment Bureu on a subway entrance at night. I thought the colors and font were too dark at not contrasting enough to draw attention. But seeing them lit properly on a below ground subway platfrom now, I a pretty keen on them.

The silver color didn't translate that well in my photograph, but it is really gorgeous looking in real life and draws the eye because it is a color so rarely used as the dominate color in billboard advertising. The movie is based on a Phillip K Dick sci fi novel which takes place in the present day, and the tone of the poster seems to convey the idea of a present day where things are not quite right.

And besides, it has a photo of smoking hot Emily Blunt on it. I think all movie posters would be drastically improved by her presence on the poster.

You may think this would be missleading given that she would not be in the majority if the films she was on the poster for if she was on all movie posters, but I think that the solution to that problem is that every movie should have in it either Emily Blunt or Amy Adams in it.

So in conclusion I would highly reccomend the film Sunshine Cleaning. It is the only film I know of to star both Emily blunt and amy adams.

I don't think that was the direction I intended this post to go when I started typing it. But it is a valid point, though a movie reccomendation isn't really part of the scope of this blog and I can't even try and relate it by talking about the sunshine cleaning poster since it has an achingly mediorce poster, especially when you consider the cast.