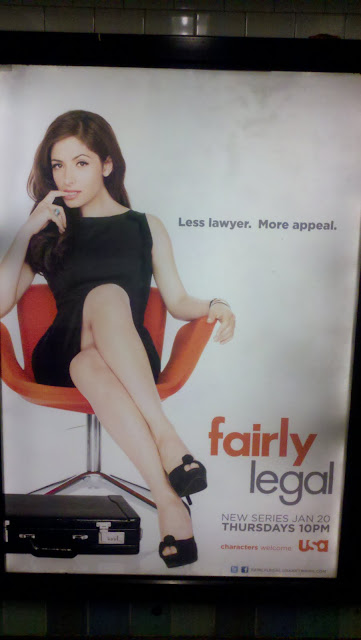 Both the USA and Showtime networks seem to have hired the same minimalist advertising agency, with Showtime's Dexter slogans over the years being: "Takes life. Seriously." And, "Killer. Dad." Along with the Californication ads this year which read: "Sex. Appeal."

Whatever agency this is that only makes ads using slogans under 5 words long and baed on punctuation based puns, has assumedly also been behind such USA show slogans as, "Partners in Crime. (Solving)" which is something of a game changer for these punctuation pun ads since it uses the new element of parentheses.

But I think the pun that takes the cake this years is the ad to the left for fairly legal,  which carries the slogan: "Less Lawyer. More Actress Whom You Want to Ogle."

The main reason I choose to present you with this ad out of the variety of similar punctuation driven ads, is that I wanted to note that I would bet money that USA wanted to call this show Barely Legal before discovering that Larry Flynt wanted too much money to license out that name.