Yay! Here is an Ad for Strippers!

This ad is much funnier if you don't know what product it is gonna be for when you start watching it. So I put it into tube chop since Youtube lists the title of videos at the top when you embed them. This is probably a little excessive but I figured if I'm gonna post this I might spend the extra minute so you can get the full effect.

As I am inclined to do when I want to discuss an ad without spoiling it. Here is a Bruma Shave ad to act as a buffer:

This is a cute promo, but obviously the reason it works so well if because the string dance has this element of recent history nostalgia attached to it. Conan went off the air on January 22nd, and with today being September 22nd, this means that sometime next week conan will have been off the air longer than he was host of the Tonight Show.  Admittedly 7 months isn't that long a time, but Conan after getting fired cause of dick moves by NBC and Leno, I really don't think its an exaggeration to say he has become a folk hero for folks under 30. Here is another ad that uses the same song and concept to promote Conan (the proletariat's late night host).

I don't have much to add in terms of Analyzing the above ad, its a clever concept and I like the angles they chose for the shots. Instead I'm gonna talk about the awesome beard conan has been rocking in the print ads and viral videos for the new show, because, well, beards are cool. (My concept of the criterion of cool is the original Brawny Paper Towel man.) 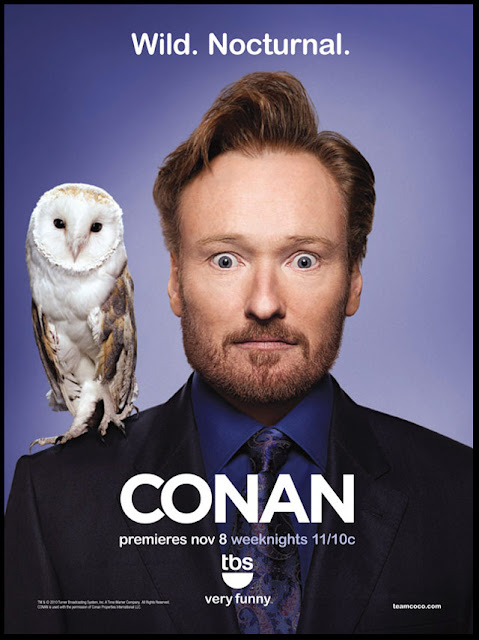 I hope he keeps the beard, or at least has it for the first episode and has Tom Selleck come and shave it down to a mustache for him on camera. I wrote that previous sentence hoping that I could follow it with a great old clip of Tom Selleck shaving off half of his mustache on "Late Night" but apparently that clip does not exist on the internet. I did find a random news article about it though so I proof I didn't dream this event.

So instead I with some Late Night clips, because I ended my last post with one and that post didn't even have anything to do with Conan.

I Can't find this one with the intro for some reason but here is a clip from when Conan used do a bit where they would pretend to use the NBC satellite dish to watch obscure TV channels. This clip is what was on the "Men Without Hats conversation Channel"

I probably could and should just stop after posting two reasonable length clips here, but instead I'm going to post the funniest 20 minutes ever to be on television. Here is Norm MacDonald on Conan from back in the 90's. (a 20 minute clip of Late Night with Conan O'Brien is the kind of cutting edge entertainment you won't find on other blogs about advertisements.)

Burma Shave ad text from the awesome Burma-Shave.org
Posted by Danny at 12:55 PM