I try to keep the profanity to a minimum on this blog because I figure I should challenge myself to think of better descriptions of what I dislike about ads instead of just swearing at them. That said, there was no other title one could give this post. I mean its about the awesome Kenny Powers' amazing new K-Swiss shoe ads which bring joy to all who are blessed enough to gaze upon them.  (Unfortunately there is not one in my subway stop. Instead I have an other Katherine Hiegl ad. It just went up, in that same spot right by my the entrance I use that I previously ranted about the terrible poster for her movie "The Killers" was in. I really hope this trend of her terrible movies being advertised in that same exact ad space doesn't continue.

I've been trying to ignore it, but I assume at some point in the next month it will annoy me so much that I will have a short angry post about it. so look forward to that. Or actually don't. I'm not looking forward to thinking about it any more than I have to. Maybe I'll just post a photo of it and instead of commentary I'll just post a video that can serve as a metaphor for my feelings. The guy in the movie Scanners sweating until his head explodes would be apt.)

This rapidly turned into angry rant so lets bring it on back home and get right down to topic at hand. The man, the myth, Kenny Fucking Powers. Here is the K-Swiss MTA ad and an awesome 4 minute K-Swiss ad were Kenny tells the K-Swiss executives his ideas for commercials starring him. 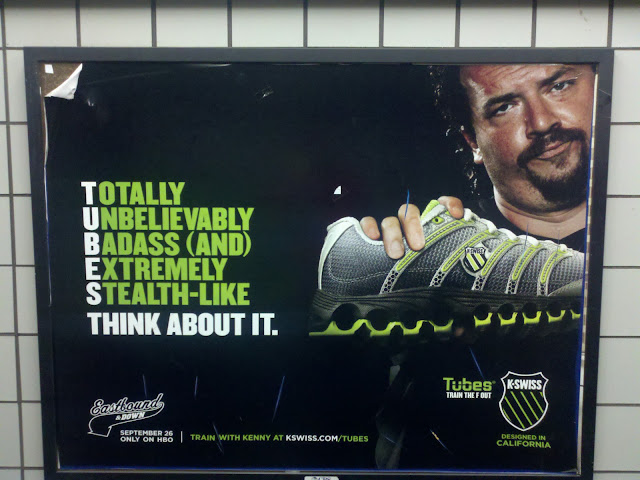 How great are those ads? To quote my cousin Shawn, "Who wouldn't buy those
stupidly ugly shoes with Kenny Fucking Powers as their spokenman?"

This actually brings up an important point. K-Swiss may be best known for making shitty over priced shoes for members of Yacht Clubs to play Jai alai in, but please everyone buy two pairs of these shoes in hopes that their success causes more companies to hire Kenny Powers as their spokesman.

Video via WithLeather
Posted by Danny at 8:19 PM

Email ThisBlogThis!Share to TwitterShare to FacebookShare to Pinterest
Labels: Kenny Motherfucking powers, Kenny Powers, why isn't this man the pitchman for every product.