I dont know what the hell is going on in this ad, 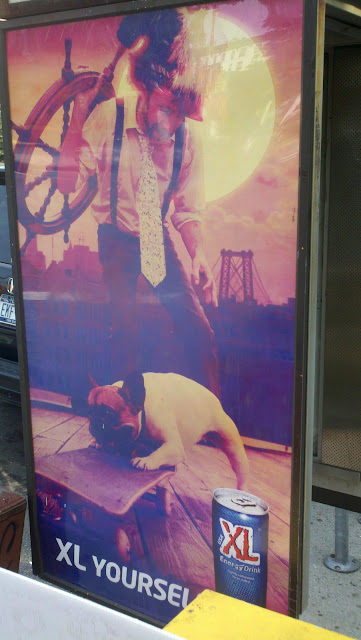 but I love every aspect of it.


I'm trying to picture the circumstances which resulted in this ad.

[A white dude with a camera around his neck dressed like late period Jimmi Hendrix enters and begins talking at a rapid clip.]


Dude with camera: Red Bull already has the extreme sports fan market shorn up, so no point in shooting an ad that appeals to them. And Monster and Jolt already have the meth addict market down.

So what I'm gonna do is dress a man in clothing thrown out 20 years ago by the lead singer of They Might Be Giants, put a huge cerimonal british naval hat on his head, and have him carrying around an entire ship's wheel so you know he likes to party.

Then we are gonna super impose a fucking preposterously huge setting sun behind him so he looks like he is in a cartoon or on another planet or some shit...


XL energy drink executive: Who are you? how did you get into our board room? Also what possible target demographic is this supposed to be appealing to?

Dude with camera: You didn't let me finish. The guy with the ship's wheel will be looking down in front of him. And in front of him will be a pug dog riding a motherfucking skateboard. [The man makes an explosion sound effect,  sits down in a chair at board room table. Somehow produces an already lit hookah from his camera equipment bag, takes a long puff and releases a dragon like amount of smoke into the board room.]

XL energy drink CEO: This man is a visionary! Johnson, write him a check for our entire ad budget! I want these photos of Capt'n Hipster and his trusty sidekick "Ol' Tubby" on every phone kiosk in New York City!

Except apparently they couldn't afford to put this ad on any phone kiosks except for this one near Columbia Presbyterian Hospital.  I'm tempted to look this company up to see who they are and why they chose this ad and why it is only on one random phone booth in the whole city, but I prefer my scenario.
Posted by Danny at 7:03 AM