What the fuck Times Square. 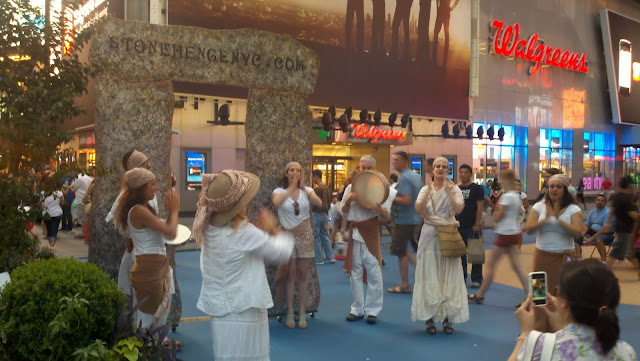 I was pretty excited the other day when I walked into Times Square around sunset and saw a bunch of wannabe Druids playing drums and doing a sycronized dance in front of an profoundly cheap particle board cut out of a stone henge arch. It even had the word "Stonehedge nyc .com" spay painted on it in not quite evenly spaced letters.

I assumed this was some sort of New York Druid* revivalist religion, pro-hippies trying to encourage Times Square tourists to get back in touch with nature.

Unfortunately, apparently everything that has occurred in Times Square since V-E Day kiss has been done solely to advertise companies with more money than ideas.** It turns out this was not some sort of Neo-Pagen cult***, but rather a really terribly conceived promotion for an apartment broker. And one that deals only in high end apartments according to a pamphlet one of the cult members was handing out.

Because clearly if you want to generate interest in your Real Estate company the best thing to do is hire a bunch of failed actors to beat drums and dance around.

This company was brilliant to decide to advertise in this way, as this will definitely shore up the much coveted demographic of people who are looking for luxury apartments and who are also shit-eating crazy.

*Yes I know the latest research says the Druids had nothing to do with the construction of Stone Henge, but i think it is fair to say that everyone still associates it with them. Like how i still always (incorrectly) think the Criminologist from Rocky Horror was the bad guy in Last Crusade. (See Thor's Hour of Thunder Episode 22 for more on that.)

** Or in the case of the dude a few weeks ago who shut down Times Square for 3 hours when he refused to stop Rapping on top of a Times Square lamp post, want to Advertise their wrap career, but don't have a big publicity budget, and are also insane.

***Who I would have tried to talk into worshipping Thor. (Yes this is a very footnote heavy post, thank you for noticing.)
Posted by Danny at 9:41 PM