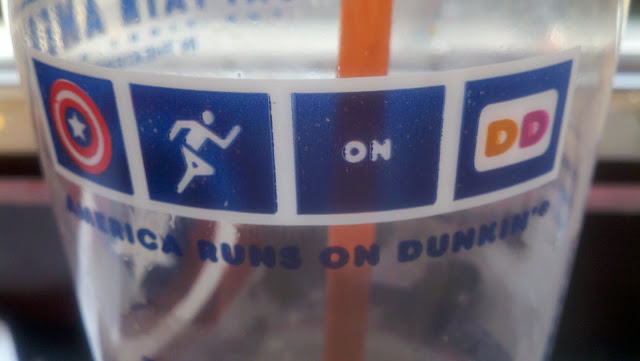 This is hokey, but I like it.
I always thought the pictogram for "America Runs on Dunkin'" was clever. Having it as the only element in the center of the orange one dozen Dunkin' Donut boxes was really striking product design.
These new logos promoting the Captain America movie are a genuinely clever way to do a movie tie in.
Some may argue using the Captain's shield to represent America is either hokey, or crass commercialism, and is definitely is both. But I think the same can be said for the original Marvel character.
His character was created during World War II to both instill patriotism into a nation a war, and to exploit the already existing patriotism of a nation a war.
A perfect example of this existing from the beginning was Captain's issue one, which featured him punching out Hilter on the cover, while we were still in the thick of the War for Human Survival.*


Footnote(s):
*FDR called World War II "The War for Human Survival" it old became called "World War II" after the war had ended. Similar to how "Art Deco" was never called "Art Deco" while the movement was still going on. Okay maybe not that similar, but i wanted to fill this footnote with as much trivia as possible.