This trailer is awesome. 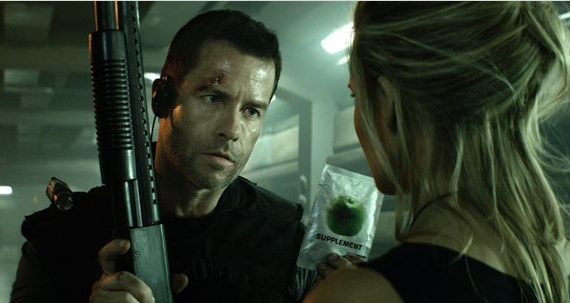 Guy Pearce is fucking rad. Even the less awesome movies he is in like "The Count of Monty Cristo" he is still awesome in.

And lets not forgot that "Hurt Locker" sets up how fucking hard as nail you have to be to be on a bomb disposal team in Iraq buy setting up Guy Pearce as awesome in the first 30 seconds and having him get blown up a minute later.*


Pearce's two best roles (at least of the films of his I've seen) are as the leads in "Memento" and "L.A. Confidential", where he is able to convey the vulnerability of characters struggling with an immoral world around them.

Pearce appears to be playing the completely opposite end of the vulnerability spectrum as the cheeky jacked badass hero in his new space prison rescue mission movie, which is either called "Lock-Out" or "MS One: Maximum Security" depending on which region of the world you live in.


If this new movie is half as 80's wisecracking hardcore action hero-y as this trailer implies, it will beat The Expendables at its own game. Expendables was a fun movie but Stallone clearly focused more on getting the cast he wanted and the interactions between the members of the team, instead of say, the action or directing, this left the viewer with a really fun action movie which often looked like it was shot on a cell phone, and didn't have very clever action sequences, other than the occasional cool shot of Jason Statham throwing knifes.


Footnote(s):
*Spoiler alert, except not realy since that is the first 3 minutes of the film.


trailer discovered via Filmdrunk.com
Posted by Danny at 9:14 AM